Last night, in honor of the 400th anniversary of Shakespeare's death, the BBC did a streaming Internet broadcast of Richard II. It was the Royal Shakespeare Company's production starring David Tennant, the same production currently showing at the Brooklyn Academy of Music.

While I haven't been able to get over to Brooklyn (or shell out the money for a ticket) to see the live production, I quite enjoyed the broadcast. The production begins with a coffin on stage, presumably holding the body of Thomas Woodstock, Duke of Gloucester. Shakespeare's original audience would have already been familiar with the controversy over Woodstock's death. (There was a whole play about it, albeit not written by Shakespeare.) For a modern audience, however, the presence of the physical coffin was a helpful reminder.

Throughout the first scene, a female figure is draped over the coffin, and as soon as everyone (except John of Gaunt) leaves, she rises. It is the Duchess of Gloucester, Woodstock's widow, and the production transitions seamlessly into the second scene, where the Duchess tries to prod Gaunt into action:

Finds brotherhood in thee no sharper spur?
Hath love in thy old blood no living fire?
Edward's seven sons, whereof thyself art one,
Were as seven vials of his sacred blood,
Or seven fair branches springing from one root.
Some of those seven are dried by nature's course,
Some of those branches by the Destinies cut;
But Thomas, my dear lord, my life, my Gloucester,
One vial full of Edward's sacred blood,
One flourishing branch of his most royal root,
Is crack'd, and all the precious liquor spilt....

In Act II, when John of Gaunt dies and Richard seizes all his property to fund his war in Ireland, the production again uses visuals to tell the story. We see Richard's men with Gaunt's "plate, his goods, his money." At this point, the production is doing nothing to make us sympathize with Richard. 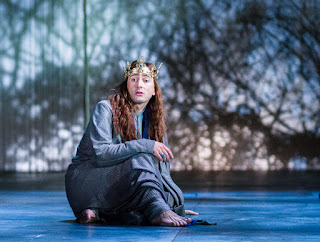 Of course, all that changes in the third act, when Richard returns from Ireland to find all of his subjects fled to John of Gaunt's son Bullingbrook, who has returned from exile to claim the inheritance Richard seized. When Richard cries out, "For God's sake let us sit upon the ground" his retinue literally does so, pausing before the monarch recounts "sad stories of the death of kings."

With Bullingbrook in power, the inquiry into Woodstock's death can continue, but the accusation scene at the beginning of Act IV was transformed into high comedy in this production. As various accusers threw down their gauntlets, the audience could not help but laugh. The climax came when the Duke of Aumerle, having already thrown down both his gloves, cried out, "Some honest Christian trust me with a gage--" and borrowed a glove from someone else so he could throw down a third challenge.

Aumerle, now demoted to being simply the Earl of Rutland, had a larger role than usual in this production. After plotting to kill Bullingbrook, and begging for mercy after his father uncovers the plot, he decides to redeem himself by murdering Bullingbrook's enemy Richard instead. In the play (as in history), it is the minor character Pierce Exton who kills Richard, but in this production, Richard pulls off the mask of one of his assassins to reveal Aumerle's face. It is he who then has Exton's lines:

As full of valure as of royal blood!
Both have I spill'd; O would the deed were good!
For now the devil that told me I did well
Says that this deed is chronicled in hell.

Though this departs from the text, as well as from the historical record, I found this choice quite affecting.

If you're interested in seeing Richard II or any of the other history plays at BAM right now, there's still time. The RSC will be presenting the cycle of history plays "King and Country" until May 1st. For more information, go to:

Posted by James Armstrong, Playwright at 8:15 AM