Last night I saw Matt Cox's wonderful play Puffs, or: seven increasingly eventful years at a certain school of magic and magic. This hilarious spoof of the Harry Potter series, told from the point of view of the school's least talented students, is oddly affecting, and definitely worth going to see.

In fandom, House Hufflepuff has been the butt of a number of jokes, but this show embraces the fact that not all of us are brave of smart or ambitious. Some people just plod along, never far from the kitchens, staying out of trouble and trying to do the right thing. As the play maintains, there's nothing wrong with that.

The plot follows Wayne Hopkins (played by Zac Moon), whose parents died, leaving him to be brought up by an uncle. One day an owl arrives with news that Wayne has been accepted to a school for magic. Oops! His uncle forgot to tell him that his parents were wizards. Or that wizards exist. Like Brian in a certain Mony Python film, Wayne then stumbles through a series of adventures in which some other kid named Harry seems to always get credit.

Like Harry, Wayne forms his own trio, including Oliver (played by Langston Belton), a math genius who can't seem to get the hang of this magic thing, and the self-proclaimed outsider Megan (played by Julie Ann Earls), who wants desperately to be bad-ass, but underneath it all is quite a nice person. They constantly cross paths with that other trio, much like Rosencrantz and Guildenstern bumping into characters from Hamlet in Tom Stoppard's famous play.

With a cast of eleven actors performing multiple roles, Puffs gives everyone a chance to shine. Particularly notable are the former stars of The Flea Theater's Smoke, Madeleine Bundy (who plays Harry as well as the perpetually terrified Susie Bones) and Stephen Stout (who does a spot-on Alan Rickman impression as Professor Snape).

Kristin McCarthy Parker does a wonderful job directing the production, which includes some effective use of puppets to create a magical world within a bare-bones theater.

You can find out more information about the play here: 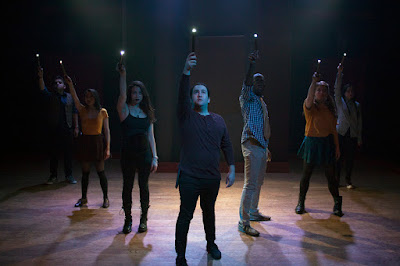