On the 22nd of August, 1843, the British parliament passed the Theatres Regulation Act, sometimes referred to simply as the Theatres Act. This legislation set up new responsibilities for the Lord Chamberlain, turning his office from a defender of monopolistic rights to a regulator of a plethora of institutions, all competing in a supposedly free marketplace.

Prior to 1843, "legitimate" drama in London was confined to the Theatres Royal at Drury Lane and Covent Garden in the winter months and the Haymarket Theatre in the summer. Other official theatres in smaller cities could also produce serious spoken drama, but the so-called "minor" houses had to introduce songs, ballets, or incidental music to skirt the law, claiming they were merely performing "melodrama" or "burletta."

In her book The Economics of the British Stage: 1800-1914, Tracy C. Davis claims that the immediate impact of this sweeping legislation at first appeared unremarkable. In part due to the economic troubles of the "hungry forties" no large investments were made in theatrical real estate until the 1860s, long after the passage of the act. Besides, the minor theatres had been breaking the monopoly held by the Theatres Royal for years. Now, they simply could do so openly.

However, Davis points out that while Drury Lane and Covent Garden lost their long-championed exclusive rights, the government actually expanded its control over drama, by giving the Examiner of Plays in the Lord Chamberlain's office the right to censor any play in any genre all over the country. Prior to the act, censorship was managed by a patchwork system, with the Examiner of Plays having authority in the City of Westminster and some Theatres Royal in the provinces, but with local authorities exercising control in other cases.

According to Davis, "By eliminating 'political' material from plays in all genres, the drama was not only purged of riot-inciting ideas, but the people could be more efficiently indoctrinated to the tastes and politics of the ruling elite." While local authorities still had some control in the provinces, the central bureaucracy in London primarily held sway.

Davis calls the impetus to regulate theatres "irresistible" to Victorians. It's no wonder then that the Theatres Act, passed 172 years ago today, is often viewed as a landmark event in the history of British drama. 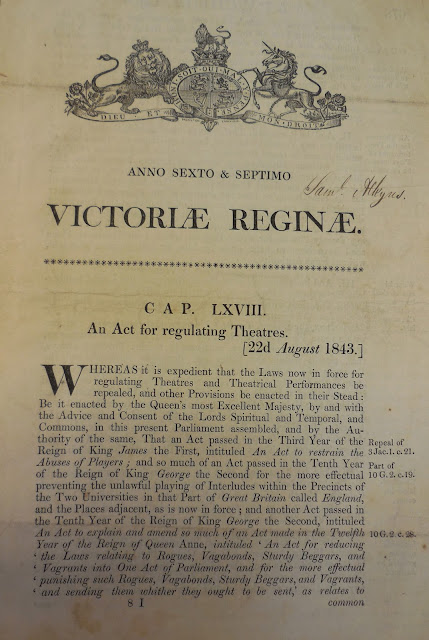 Posted by James Armstrong, Playwright at 7:41 AM