If You're Going to Do a One-Person Show, Here's How You Do It

I'm generally not a big fan of one-person plays. I've seen my fair share of good ones, and not-so-good ones (though considerably more of the latter), and I've even written a couple of them, but after a while I came to the conclusion that if I never saw another one-person play for the rest of my life, I would be okay with that. 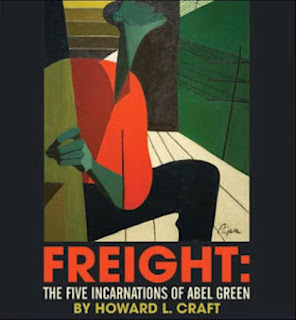 Then I saw Howard L. Craft's play Freight: The Five Incarnations of Abel Green, performed by the remarkably talented J. Alphonse Nicholson.  Theater artists take note: If you're going to do a one-person play, head down to HERE Arts Center to see how it's done. This extraordinary production directed by Joseph Megel gets it right.

As the title implies, Freight follows a young man named Abel Green through five different incarnations, from the beginning of the 20th century to the present day. We watch essentially the same character, a young, African-American man with artistic aspirations, trying to get by in a cruel world that seems all too much the same even as it progresses across decades of history.

In the first scene, Abel is a minstrel-show performer hopping onto a freight train as he travels from town to town. By the time Nicholson performs the famous Bert Williams song "Nobody" he has already led us through the horrors of lynchings and brutal racism. Craft is certainly not the first theater artist to juxtapose seemingly light-hearted minstrel shows with the inhuman conditions in the country that gave rise to them, but he manages to deal with the material with a finesse and subtlety many critics found wanting in such pieces as the Broadway musical The Scottsboro Boys, for instance. 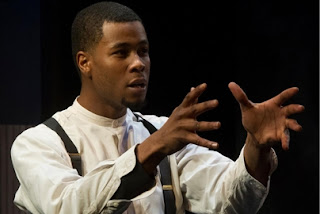 The second scene shifts to a passenger rail car in Depression-era America, where Abel Green has been reborn as a phony faith healer turned Pullman porter. Again, the faith healer trope is something we've seen before many times, but Craft gives the story a new twist, where Abel doesn't realize he's a fake. Tricked into believing he really is an instrument of God, he falls blindly into the role provided for him by a corrupt church. Abel is once again playing a role, as surely as a minstrel-show performer. Through what seems to be a miracle, however, he survives a near fatal assault and finds a new life, making us wonder if he might be an instrument of God after all.

A third scene set in the late 1960s shows Abel Green as a small-time crook turned FBI informant on the Black Panthers. Instead of seeing the grand rise and fall of the Black Panther movement, the audience is shown one sliver, giving us a taste of heady dreams of revolution and a collapse into chaos. Set on a subway train (sensing a trend?) the play captures both optimism and cynicism, and sucks the audience into a paranoid world where it seems impossible to tell whose side you are really on at the end of the day.

A fourth scene (also on a subway train) remakes Abel Green into an actor in the 1980s. Stuck playing ridiculously stereotyped roles that seem no better than minstrel-show acts, Abel follows his friend and mentor to try to do real art, only to see the lives of those around him crumble in the AIDS epidemic. An unexpected theme of homosexuality emerges in the piece as something surprisingly new, and yet with the feeling that it had always been there, just never discussed.

In the final scene, Abel is transported to the present, where he recounts his role in the housing bubble in the early 21st century and his descent into homelessness that is also an ascent into dreams of a better world. All five of the scenes make use of video projections by Eamonn Farrell, but this one rises far above the rest, enveloping the audience in a sense of the vast reaches of human potential.

One of the fun aspects of the piece is that certain off-stage characters appear again and again, always with the same names. A mentor/friend, a smart and sexy seductress, and others crop up from scene to scene, each time reborn, just like Abel Green, ever old and ever new.

Freight is only playing until August 9th, so get your tickets while you can! For more info, go to:

Posted by James Armstrong, Playwright at 5:53 AM