I just got back from seeing David Meyer's wonderfully disturbing play Broken. It's been selling out, so you should get your ticket to see it soon.

The play is about a young man imprisoned for killing 17 people at a shopping mall in a horrendous mass shooting. The character, played by the playwright himself, is self-pitying, sometimes self-loathing, sometimes self-aggrandizing. What made him do it? He simultaneously has no reason and too many reasons, but none of them seeming to make sense. Clearly, this young man is broken. 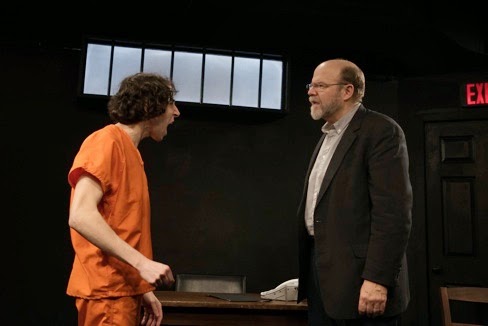 A prison psychologist, played by Broadway veteran Michael Pemberton, takes an interest in the killer. He is an Ivy League graduate with no family, yet he works in a dingy office in a prison and seems oddly drawn to the recent tragedy.

Early in the play, he admits that as a young man he planned to bomb his school, but was stopped by his father. Then, the doctor makes a slip, saying he learned how to make the bomb from the Internet. Far too old to have used the Internet in high school, he quickly changes his story to looking up microfilm at the library. Clearly, something is not right, and the audience becomes aware than more than one character in the play is broken.

Much of the interest in Broken is watching the truth gradually unfurl. As the secrets come to the surface, pictures emerge like developing photographic plates coming into sharper focus. Even the climactic reveals at the end of the play seem less like melodramatic surprises and more like tragic inevitabilities.

The play is showing as Shetler Studio Theatres. It is tastefully but modestly designed, including original music by Pemberton. Daisy Walker directs the piece with restraint and balance.

Broken is only playing until April 26th. For more information, go here: