Last night I saw Smoke by Kim Davies. Tom Costello directed this wonderful production at The Flea Theater starring Stephen Stout and Madeleine Bundy. The play rework's August Strindberg's Miss Julie, resetting the story in a Manhattan kitchen while an S&M sex party is raging just outside the door. 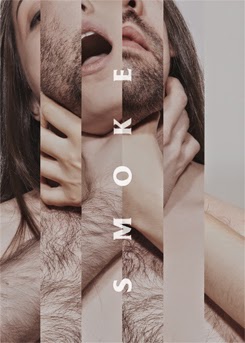 As Julie, the privileged daughter of a famous art photographer, Bundy immediately projects an air of self-consciousness, an affected naivete one sees so often in the children of the rich. Toward the beginning of the play, instead of lighting her own cigarette, she pretends to be afraid of the lighter in an effort to coax a handsome man into lighting it for her. She acts the part of the beginning smoker, but we soon see she knows precisely what she's doing. The games begin.

Stout plays John, an aspiring artist who works as an intern for Julie's father. The ringing bell in Strindberg's Miss Julie is replaced in this production by John's cell phone, which periodically goes off with late-night calls from his boss making ridiculous requests. John informs us he's a dom, but he is clearly submissive to his alpha-male employer. His kink, by the way, is knives. Though I'm informed the props were "professionally dulled" for this production, they look as razor sharp as the characters' verbal barbs.

The design for the show is excellent, but most impressive is Lee Kinney's sound design, which realistically provides ambient noise from the next room, growing louder each time the kitchen door is opened. Jesse Geguzis provides the fight choreography, and like a good S&M participant, makes what is safe feel dangerous.

If you're interested in seeing Smoke, it's playing through November 9th at The Flea. More information here:

Posted by James Armstrong, Playwright at 8:22 AM