Last night, I had the pleasure of attending the Theatre du Grand-Guignol in Paris!

Well, not quite, but The Flea Theatre did perform three plays from the Grand-Guignol tradition. The performances were a part of their "Cutthroat Series" and the theme for the evening was Gore. This was not a case of false advertising, by the way. 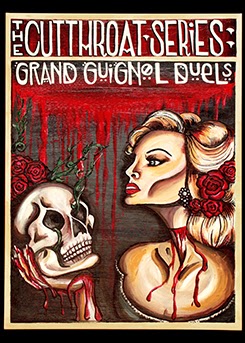 The first play, Madhouse, was originally written by Andre de Lord (the most prolific author of plays for the Grand Guignol) and Alfred Binet. Corbin Went did the adaptation for the piece, which follows a young woman about to be released from an insane asylum. If she can survive the night....

At the original Grand Guignol during the turn of the century, horror plays would alternate with short sex comedies, and the Flea stuck to that method by following up Madhouse with Tics, or Doing the Deed by Rene Berton. Directed by Stebos, whose wonderful production of The Cherry Orchard I saw a while back, this light-hearted romp was probably the most successful of the three pieces. Three men with post-coital tics find themselves being very naughty... and then being found out.

The Final Kiss filled out the evening. This play by Maurice Level tells the story of the victim of a vitriol attack who actually speaks out in order to get a lighter sentence for the woman who splashed acid in his face. Of course, he might have had other motives than pure benevolence. This 1912 play had staying power, and even made it into horror comics of the 1950s. It's worth checking out.

At the end of the evening, the audience is invited to vote for their favorite play. The Cutthroat series has more installments, featuring plays on Cruelty, Night Terrors, and Lust. The winners will return for an extended run in January.

The series runs through December 22nd. Find out more here:

The Flea Theater
Posted by James Armstrong, Playwright at 8:04 PM