It is six years since we saw King John, with some seven ragged supernumeraries for the power of England, while that of France, headed by a king in boots a la Louis Quatorze, crawled about the stage with three. What a picture has taken the place of this! ... The accoutrements are complete, from the helmet to the spur of each mailed warrior. Not a distinction is missed in the appointments. From citizen to baron, gentleman to knight, herald to man-at-arms, soldier to servant, priest to king, gradations are marked with picturesque exactness, to the eye and to the mind.

These comments might be overlooked by some as the effusions of an admiring theatre fanatic with no real sense of historic costuming. However, we know that Macready's production did employ costumes that sought to reproduce the period with meticulous accuracy. In the twentieth century, Macready's granddaughter discovered 39 sheets of watercolor costume designs. Of these, 12 were for King John, showing a total of 15 figures, all with a reasonable degree of historical accuracy. 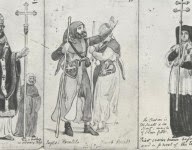 According to the theatre historian Charles Shattuck, the watercolors are probably the work of Col. Charles Hamilton Smith, a noted antiquarian of the time. Most interesting to me is the fact that the watercolors seem to strive not just for historical accuracy, but for an audience's idea of what the period should look like. For instance, the image of Cardinal Pandulph shows him in a wide-brimmed cardinal's hat. However, notes on the back of the image indicate that such hats were not actually worn until 1245, decades after the death of King John.

The designer seems to have realized that in some cases, historical accuracy can get in the way of a production. We all picture cardinals in big hats, so to have Pandulph without the traditional cardinal hat would have gotten in the way of the audience's understanding of the play. Whether the costumers ultimately followed through on Smith's suggestions (as Shattuck believes they did) the images show Macready was interested in creating the most historically accurate costumes he could, provided they truly served the play.

Scenery was also important to the production, and again, historical accuracy (within reason) seemed to reign. Forester noted in his review:

The scenery has had the same attention. The council room, the field before and after battle, the fortifications of Angiers, the moated and embattled fortress of Northampton, the glitter of the Royal tent, the gloom of Swinstead Abbey; they have all the air of truth, the character of simple and strong fidelity. And above all, in every movement of the tragedy, there is Mind at work, without which wealth of material is nothing.

William Telbin was in charge of painting the backdrops. Though he had been working on scenery for a while, this was Telbin's first really big job for a major London theatre, and he received a whopping 250 pounds for his work. For the first several performances, Telbin was not credited, but by mid-November his name was being recorded in the playbills.

Telbin based his designs on real places, but he modified them to create his stage pictures. For instance, in depicting Angiers, he left out the moat, reduced the number of towers, and placed the entrance in the foreground to be more dramatically effective. He also got rid of the black and white bands that make the castle distinctive, but not like the average audience member's idea of what a castle should look like. He also exaggerated the mountains in the background for a heightened effect. 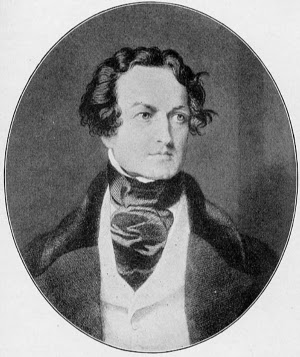 Macready directed the cast with extraordinary skill. He himself played the title role, something he had previously done for Charles Kemble's company at Covent Garden. According to Shattuck, Macready had played the king a total of 25 times in London before his own 1842 revival, but not to the meticulous actor's own satisfaction. The reviewers were kind, but Macready was not satisfied with his performances until he had helmed his own production of King John.

This was not merely a star-focused production, however. Macready's King John was noted for the power of its ensemble cast, and for the skill with which Macready handled the crowd scenes. As Forester wrote:

The crowds on the stage are instinct with life and passion. Yielding to the impulse of their leaders, they rise to fierce activity or sink into grim repose. These sudden changes are the very picture of that age: its selfish insincerity, its rude devotion, its servile slavery. Men they are not, though with those gallant forms of men, they are machines of war.

Samuel Phelps played Hubert, and reviewers praised his acting as second only to Macready's. Critics singled out as particularly masterful the temptation scene, where King John tells Hubert to kill the young Prince Arthur. Certainly, Macready and Phelps acting out such a splendid Shakespearean duet must have produced fireworks. Also, Phelps was particularly affecting in his interactions with Arthur. He generated intense pathos with his struggle between obeying his monarch and doing what was right.

The part of Arthur was taken by a child actress, initially one Miss Newcombe. One reviewer found her performance "overtrained," but that is perhaps a danger for child roles in general. The part also requires a bit of acrobatics, as Arthur must leap down from a tower in the fourth act. Apparently, some men were waiting below to catch the actress in a carpet. They would then tumble her through a gateway and down some steps. Some critics felt rolling down stairs after the fall was just a tad too much. (Critics....)

James Anderson played the bastard Faulconbridge with all the cynicism that we associate with the role today. For Macready's audience, this was a tremendous departure from the standard heroic portrayal of the character. Most reviewers hated this new interpretation, though a writer for the Atlas praised it as "more true to Shakespeare than Charles Kemble's more smiling and polished effort." Obviously, the play's subsequent stage history has vindicated Anderson's acting choice.

The incomparable Helen Faucit played Lady Constance, one of Shakespeare's more memorable heroines from the history plays. She had played the part opposite Macready at Covent Garden when she was only 19, but now at 25 she had acquired greater skill as a performer without having lost the charm of her youth. Unfortunately, she was still overcoming an illness when the revival opened at Drury Lane, so her initial notices were not good.

Her later performances, however, helped to change people's idea of the character. Previously, tragic actresses like Sarah Siddons had portrayed Constance as prideful and self-willed. They filled the character with ambition and delivered their lines with bitter sarcasm. Faucit emphasized Constance's tenderness and maternal affection. While still scornful of her enemies, Faucit's Constance rose to a noble grandeur that contemporaries felt was superior to the Constance of Siddons.

The costumes, scenery designs, and acting choices of Macready's King John all had a tremendous impact on later productions of the play (especially Charles Kean's production which later toured America, bringing British stage traditions to the U.S.). Perhaps the most significant choices Macready made, however, were in how he chose to cut the text.

And how did Macready manage to trim back the monster of King John into a concise, effective piece of theatre? I'll be writing about that on the blog tomorrow.

Posted by James Armstrong, Playwright at 9:38 AM