On this Independence Day Eve, I am going to write about a very British play, Dion Boucicault's 1841 comedy London Assurance. Tomorrow, I'll post about an American play to celebrate the fourth.

London Assurance was the first big hit of Boucicault, an Irish writer who knew the English very well. In fact, London Assurance is often considered the nineteenth century's second-greatest English comedy of manners, following only The Importance of Being Earnest by Oscar Wilde, another Irishman who knew the English better than they knew themselves.

And let there be no mistake: This is a very English comedy. It ends with this rather sententious line:

The title of gentleman is the only one out of any monarch's gift, yet within the reach of every peasant. It should be engrossed by Truth -- stamped with Honour -- sealed with good-feeling -- signed Man -- and enrolled in every true young English heart.

However, it is not the play's moralizing that is most interesting, but its sexual politics. The plot concerns Grace Harkaway, who if she wants to keep her fortune, must marry old Sir Harcourt Courtly. Grace has no problems with a marriage of convenience, considering love an "epidemic madness" against which she has been "inoculated" by her own good sense.

This lasts until she meets Courtly's son Charles, who has improbably disguised himself as another man. Charles leaves her and returns in his own identity, telling the tale that the man she fell in love with was killed in an accident. Boucicault has Grace see through this maneuver, however, and she uses it to torment him until he tells the truth.

But while Grace was perfectly willing to marry Charles when she thought it would cost her a fortune, she is hesitant once she realizes he is Courtly's heir. She had made up her mind to marry for love, and now that she knows marrying Charles will save her a fortune, she can't bear the thought of marriage for motives that are even minimally mercantile. It is only once Grace finds out that her uncle has been putting aside money for her so she can be independent, that she allows herself to agree to marry Charles--on her own terms. 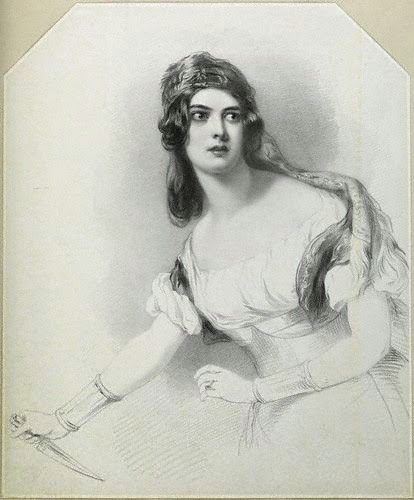 This plot alone would be mildly amusing, but Boucicault had been taken by the actress Louisa Nisbett, pictured here.

Now the famous Lucia Elizabeth Vestris, better known as Madame Vestris (not to be confused with Madame Vastra, the Lizard Lady from the Dawn of Time), was running Covent Garden, and she had cast herself as Grace. What was poor Dion to do? The answer was obvious. He had to re-write the whole play and include a new part that perfect for Nisbett.

I'm not sure if the role was perfect for Nisbett, or just plain perfect, but Boucicault dreamed up the character of Lady Gay Spanker, who enters "fully equipped in riding habit, etc." That "etc." presumably included the horse whip Lady Gay later threatens to use on a man. She loves nothing so much as hunting, except of course for her husband, Dolly Spanker, whom she whistles for when he's needed.

Dolly has a bit to drink at a dinner party and at the instigation of Sir Harcourt decides to assert his masculine authority, which Lady Gay finds to be just the cutest thing. Dolly's assertions are ridiculous, and his wife can't help but laugh at how adorable he is when he tries to pretend to be in command.

After Dolly stumbles away, however, Sir Harcourt comes onto Lady Gay. In order to help Charles's suit with Grace, she pretends to be attracted to the aged Sir Harcourt, clearing the way for the old man's son to sweep away his intended. She claims to be oppressed by her husband, complaining: "I never have anything but my own way: and he won't permit me to spend more than I like."

Dolly overhears his wife pretending to agree to Sir Harcourt's advances. One of the other men suggests he challenge Sir Harcourt to a duel, an idea that greatly pleases Lady Gay. Dolly doesn't want to fight, but his wife insists upon it, dictating to Dolly the words of the challenge he must write. He says he doesn't believe his wife really intended to run away, but Lady Gay is so excited by the prospect of a duel that she insists she did.

Things change, however, when it seems the duel will actually take place. Lady Gay knows her husband wouldn't stand a chance, and she becomes increasingly anxious when the two men go off together to fight. Fortunately, the duel is stopped, with Grace's uncle discharging the weapons for safety. Lady Gay, however, fears her husband is dead, and his reappearance leads her to promise obedience, swearing she'll never hunt again unless he wishes it.

Lady Gay has learned her lesson, but so has Dolly, who declares:

No, no -- do what you like -- say what you like for the future! I find the head of the family has less ease and more responsibility than I, as a member, could have anticipated. I abdicate!

So it seems the Spankers go right back to the way they were before, but with the renewed knowledge that their marriage works best when she's in charge and he does what he's told.

Boucicault is not advocating this type of relationship for everyone, but he holds it up as a model that can work for some couples. The fact that the play was such a hit with Victorian audiences would seem to indicate that the nineteenth-century public might have been more progressive than we generally give them credit for being.