A Gentleman's Guide to Love and Copyright

Many thanks to magnificent musical theater writer James Harris for pointing out the topic for today's blog post. It's a story of art, greed, and the legal system finally doing the right thing.

So you've seen those ads for A Gentleman's Guide to Love and Murder, and you watched that wonderful number on the Tony's. You might also have seen an old Alec Guinness film called Kind Hearts and Coronets that looked kind of similar. Hey, is the musical based on that movie?

The answer, after much litigation, is no. If you want the full opinion of District Judge Richard J. Holwell, you can read it here:

However, I'll spare you the legalese, and summarize the judge's findings.

It all started in 1907 when Roy Horniman wrote the novel Israel Rank about a vengeful young man who murders a number of people in line for a noble title so he can inherit it himself. In 1949 Ealing Studios made a film, Kind Hearts and Coronets, which turned the story into a comedy and had Guinness play all of the murder victims, male and female. 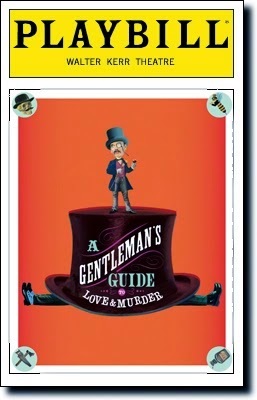 Songwriters Steven Lutvak and Robert L. Freedman thought the story would make a great musical. (Opinion of the Tony Awards voters: They were right.) They entered into an agreement with the copyright owners of the film, a company called Canal+ Image UK Ltd., allowing Lutvak and Freedman to develop the piece and then pitch it to Canal+ for a possible production.

The dynamic duo did their thing, showed the show to Canal+, and the company passed. Why? Well, clearly these guys were a couple of hacks. Their show was never going to go anywhere. These yahoos couldn't write their way out of a paper bag. (Here the Tony Award voters, and legions of ecstatic Broadway audiences, respectfully dissent.) What were Lutvak and Freedman to do? They had a great show on their hands, which anyone but a bunch of corporate suits at Canal+ could see, but they didn't have the rights to the film.

Not a problem! What Canal+ seems to have forgotten was that they didn't have the rights to the story, just to the film. Horniman's novel is in the public domain, and anyone in the world had the right to adapt that. They just couldn't adapt the film. The team went about making changes to the show. According to the court's findings, when the film made minor adjustments, such as switching a character's name from Phoebe to Edith, the musical went back to the original version in the novel. In some cases, such as the ending of the story, which is different in the film, the musical came up with something entirely different, in that case providing a third ending to the story (and probably the best one, anyway).

Once the musical was poised for a pre-Broadway run, however, Canal+ got sour grapes. They had passed on a great property, and now lots of investors were about to make lots of money, and Canal+ wasn't one of them! They sued. Though the musical had not used the changes that the film had made to the novel, the play did have two things in common with the movie. The first was that they were both comedic, and gruesome murders had been turned into comic romps. The second was that the multiple roles of the different murder victims were all played by the same actor. Those are copyrightable changes, right?

Well, um, no. At least not according to the United States District Court for the Southern District of New York. Basically, Canal+ was arguing that you can copyright tone and theatrical devices. You simply can't copyright the idea that something's a comedy, otherwise, once someone, say, spoofed Hamlet, no one else would ever be able to spoof it again. Furthermore, as Judge Holwell pointed out, Kind Hearts and Coronets is a dark comedy/drama, getting quite serious in some places, while A Gentleman's Guide to Love and Murder is a slapstick farce. The tones are similar, but certainly not the same.

The one area where Canal+ might have had some hope was in the device of having one actor play multiple roles. However, Judge Holwell ruled that this was a common dramatic device and not something that can be copyrighted. He compared an actor playing multiple roles to such common devices as a character talking directly to the audience or men disguising themselves as women. Sorry, Canal+, but you can't copyright an idea that goes back to the Greeks. Case dismissed.

Lutvak and Freeman won, but more importantly, Broadway audiences won, as now they get to see a great show that otherwise would never have seen the light of day. As for Canal+, they could be sitting on top of a Tony Award-winning Broadway hit. Instead, they're just sitting on a pile of legal fees.
Posted by James Armstrong, Playwright at 9:52 AM