I was telling some of my colleagues about my trip to Germany this summer to see the Ruhrfestspiele in Recklinghausen. One of the plays I talked about at length was Death in Venice, a very provocative adaptation of the novella by Thomas Mann. I happened to have the program right there, and just as I was getting ready to go, I hear, "Oh, you didn't mention it was directed by Thomas Ostermeier!"

To be quite honest, I didn't realize that Ostermeier had such a big name. Well, as I am finding out, Ostermeier is one of the top directors working in Germany today. Since 1999, he has helped lead the Berlin Schaubuhne. He directed a notable production of A Doll's House in 2002 and took on Woyzeck in 2003. He frequently employes multiple media in his work, as was the case with Death in Venice, which utilized giant projections of the actors' faces as an on-stage cameraman filmed close-ups in full view of the audience.

Ostermeier began his career at Berlin's small Baracke Theater. There he directed Brecht's A Man's a Man, as well as directing translations of edgy English plays by the likes of Sarah Kane and Mark Ravenhill. Over the years, he's also directed a number of pieces by American playwrights, from Nicky Silver to Eugene O'Neill to Tennessee Williams.

Here's a publicity shot of his take on Death in Venice: 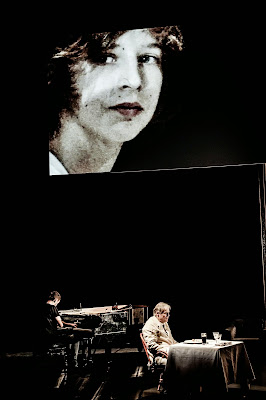 In addition to making use of projections, the production also incorporated live music composed by Gustav Mahler. Not everyone in the audience loved it (one couple walked out on the performance I saw), but if you have a chance to catch this production some time, I recommend it. It is definitely worth seeing.