Today is the birthday of the actress Sarah Siddons, who was born in Wales on July 5th, 1755.

Her father Roger Kemble was Roman Catholic, and her mother Sarah Ward Kemble (who went by "Sally") was Protestant, so they decided to raise Sarah and the other girls as Protestants, while her brother John Kemble and the other boys were raised Catholic.

Sarah Siddons, who married in 1773, played a variety of roles, including Belvidera in Venice Preserv'd, Calista in The Fair Penitent, Isabella in The Fatal Marriage, and of course Lady Macbeth. Less attention has been given to her performances in another Shakespearean role: Hamlet.

Siddons first played Hamlet in Worcester in 1775. By this time, she had made her first failed debut at the Theatre Royal, Drury Lane, and was banished to the provinces. Two years later, she repeated the role, this time acting opposite her brother John, who played Laertes.

At that point, neither Sarah nor her brother were particularly famous, but as Siddons performed more frequently in Bath, which was second only to London in terms of the importance of its theatre scene, her reputation grew. She was already a star in Bath when she played Hamlet again in 1781, this time in Bristol. There appear to have been other appearances of Siddons in this role in Manchester and Liverpool around this time, though the exact dates are a bit unclear.

In 1782, Siddons made a second debut at Drury Lane, and this time she was a success. From then on, she was an outright celebrity, and she performed as Hamlet in Dublin during the 1802-3 season, and then again in 1805. When Siddons took on breeches roles in comedies, for instance playing Rosalind in As You Like It, she was ridiculed in the press, but her gift was never for comedy. As the greatest tragic performer of her day, however, she seems to have longed to play what was considered the greatest tragic role in the canon.

When she did play Hamlet, it was neither in traditional breeches, nor in a regular skirt, at least when she appeared in Dublin. We know this because a theatre fan named Mary Sackville Hamilton created watercolor sketches of some of Siddons's costumes. After seeing Siddons perform Hamlet in Dublin, she sketched out a costume for the noble Dane that was neither male nor female. We can still see legs, but a long black cloak creates the illusion of a skirt. The result is a costume that conveys androgyny rather than a single clear gender.

Reviews of Siddons's Hamlet were mixed. She studied fencing meticulously in order to get the duel scene right, and critics were surprised at how good she was in this scene. Once critic remarked that he "was never better pleased than by seeing her" in the role. An anonymous diarist recorded: "Mrs. Siddons enters with wonderful judgment into the various feelings of this very difficult character." However, the biographer Percy Fitzgerald wrote that "the general effect was that of a burly ill-formed man."

For whatever reason, Siddons never attempted to perform the part in London, but it seems to have been one she personally enjoyed. For that reason, I leave you with a sketch of her costume in that role, courtesy of the British Museum. 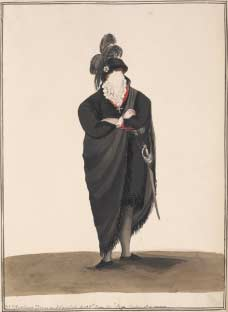