Just as the failed revolutions of 1848 brought about the climax and end of Romantic movements across Europe, the year 1968 brought a climax of the dreams and ambitions of the entire world in the post-war era, as well as the collapse of those dreams for very many.

In January of that year, the Prague Spring began in Czechoslovakia, when the liberal reformer Alexander Dubček became head of the country's Communist Party, promising "Socialism with a human face" and lifting censorship. The wave of liberalization led to uprisings in Poland and other Eastern European countries, as more and more people sought liberation from the oppressive policies of the past.

In the United States, Robert Kennedy launched a campaign for president that drew millions of young, idealistic voters. Meanwhile, his ally Martin Luther King Jr. was leading a civil rights movement that continued to be peaceful, in spite of provocations by white supremacists.

But if the year promised freedom, what it ultimately delivered was death. The bloody Tet Offensive in Vietnam left a huge number of casualties. Both King and Kennedy were assassinated. Student protests in Paris devolved into riots that failed to bring about meaningful political change. Across the United States, many cities were literally burning with social strife, and authorities tried only to contain the violence, unable (and in the view of many observers, unwilling) to stop it.

The Prague Spring collapsed, and days later, so did the Democratic National Convention in Chicago, as police clashed with anti-war protestors. The subsequent election of Richard Nixon as President of the United States and installment of Soviet tanks throughout Eastern Europe ensured that violence, repression, and decay would continue.

Though the following year, 1969, saw the first human beings land on the moon, what should have been a victory for all humanity came in the wake of so much chaos that many people were unsure of what humanity's future would really be. Modernism, which had thrived after World War II, seemed hopelessly naïve with its optimism of unending horizons and positive change.

Instead, art from around 1970 on is sometimes labelled postmodern, since it embraces skepticism and irony rather than grand gestures and sweeping narratives. Postmodern art engages with art from the past, but in a way that is eclectic, borrowing snatches and pieces of past art, but deliberately not synthesizing it together into a unified, comprehensive whole. The very notion of totality or universalism becomes a bitter joke in the hands of postmodern artists.

Postmodernism can be seen in architecture, for instance the AT&T skyscraper in New York which is topped by a non-functional broken pediment. It can be seen in photography, for instance in the work of Cindy Sherman, whose "Untitled Film Stills" series shows the photographer herself dressed up in various costumes, looking like she is in a series fictional movies. Postmodern sculptors like Jeff Koons use grand techniques to immortalize items of kitsch, producing such objects as giant stainless steel balloon animals.

Perhaps the defining element of postmodernism is its unwillingness (and perhaps inability) to get away from the past it always confronts. The postmodern feminist artist Judy Chicago spent years assembling "The Dinner Party" which includes 39 place settings at a giant triangular table, each place setting painstakingly handcrafted to honor a different woman from history, including the playwrights Hrotsvitha, Hildegard of Bingen, and Virginia Woolf.

In theatre, postmodernism can be seen in the work of such playwrights as Tom Stoppard, Heiner Müller, and Janusz Glowacki, each of whom wrote plays that deconstruct the most famous work in the dramatic canon: William Shakespeare's Hamlet. Stoppard's Rosencrantz and Guildenstern Are Dead premiered at the Edinburgh Fringe Festival in 1966, shifting the play's center of attention from Hamlet to two minor characters. The play's dialogue is deeply influenced by the work of Samuel Beckett, but its playfulness marks it as a work of postmodern drama rather than the serious modernism practiced by Beckett. Müller's 1977 play Hamletmachine goes even further in its rejection of the conventions of drama, questioning even the importance of an author at all. In 1982, Glowacki premiered Fortinbras Gets Drunk, which takes a Stoppard-like approach of focusing on a minor character from Hamlet, but to probe political issues as much as existential ones. All three writers went on to create other postmodern works, including Stoppard's Travesties, which reworks Oscar Wilde's The Importance of Being Earnest, Müller's Quartet based on the Pierre Choderlos de Laclos novel Dangerous Liaisons, and Glowacki's The Fourth Sister, which sends up Chekhov.

The British writer Harold Pinter was a close associate of Beckett, and his early works, The Birthday Party, The Caretaker, and The Homecoming, all exhibit the anxieties of post-war theatre of the absurd. Dubbed "comedies of menace," these plays rely on seemingly mundane dialogue and pregnant pauses to create an atmosphere of dread that reflected the unspoken horror of the new nuclear age. In the 1970s, though, Pinter turned in a new direction. Influenced by the postmodern turn toward skepticism and questioning, Pinter wrote a series of plays that retained the sometimes comic and sometimes tragic atmosphere of his earlier plays, but that delved into the nature of memory of past events. In Old Times, three people tell stories about their past together, sometimes revising their versions of the story, and sometimes contradicting the versions of other characters. Pinter's 1975 play No Man's Land depicts two older men recalling their past lives together, but the piece gets us to not only question whether the two men ever met in the past, but also whether the men themselves know the truth. One of Pinter's most commercially successful works, Betrayal, tells the story of a marital affair, but in reverse chronological order, from end to beginning. 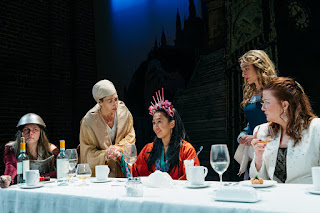 Another postmodern British playwright, Caryl Churchill, first rose to prominence with Cloud 9, an attack on Victorian colonialism and sexual repression that implies a link between the two. Her 1982 play Top Girls utilized overlapping dialogue and out-of-chronology scenes to critique the way women sacrifice themselves and one another to get ahead in the world. Written in the wake of the election of the rightwing politician Margaret Thatcher as the first female prime minister of the United Kingdom, the play celebrates feminism while at the same time critiquing it. Churchill's work sometimes appropriates figures from folk belief to discuss contemporary issues, as is the case in Mad Forest and The Skriker, but the hallmark of her plays is an unending drive to experiment. Her fragmented 2012 play Love and Information contains more than 100 characters in dozens of scenes, many of them less than a minute long.

One manifestation of postmodernism in drama has been the so-called Theatre of Images. While most traditional theatre has been concerned with language (one of the six elements of drama laid out by Aristotle), the Theatre of Images replaces linguistic texts with a procession of images that are not necessarily aligned with any verbal meaning. Directors such as Richard Foreman, Lee Breuer, and Robert Wilson are often identified as artists working in a Theatre of Images rather than a theatre of words. Foreman is influenced by modernist writers like Gertrude Stein, but he has also tried to make audience members active participants in the creation of theatre, as he did with his 1976 play Rhoda in Potatoland. He frequently directs plays with non-professional actors, preferring their simplistic expressions over the mannered performances of trained actors.

Breuer co-founded the avant-garde Mabou Mines Theater Company in 1970 (together with JoAnne Akalaitis, Philip Glass, Ruth Maleczech, Frederick Neumann, and David Warrilow). With Mabou Mines, he has re-imagined numerous classic plays from the canon. His production of Gospel at Colonus used gospel music to re-introduce the feeling of the sacred into Sophocles' play Oedipus at Colonus. Breuer's production of Henrik Ibsen's A Doll House portrayed Nora as physically towering over the men in the play, accentuating the absurdity of her situation. His production of Peter and Wendy used Japanese-style puppetry techniques to tell the story of Peter Pan, and has played to adult and child audiences alike. 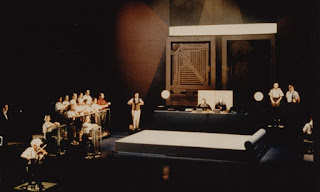 The term Theatre of Images is perhaps most associated with Wilson, who borrows from different media, cultures, and historical time periods to create eclectic pieces of theatre that usually have no discernible plot. He collaborated with the composer Philip Glass to create the 1976 opera Einstein on the Beach. Because of the length of the opera (more than five hours with no intermission) audience members were invited to come and go as they pleased, selecting which parts they chose to pay attention to and which parts to ignore. For the 1984 Summer Olympic Games in Los Angeles, Wilson planned a massive 12-hour-long performance called the CIVIL warS: A Tree Is Best Measured When It Is Down, but the Olympic Arts Festival cancelled it. Since then, Wilson has frequently worked outside of the United States.

Some scholars have labeled the Theatre of Images as postdramatic, since it eschews plot in favor of creating an overall mood or feeling. Rather than creating a narrative that tells a story, postdramatic theatre focuses on physical phenomena that audiences experience directly. While this style of theatre has its roots with modernist playwrights like Beckett, as well as postmodern writers like Müller, Pinter, and Churchill, it attempts to outgrow the playwright entirely. It renders the text as merely one component of a performance, and usually not even a very important one. Postdramatic performance stretches theatre to its limits, and because of that, most audiences have tended to avoid it, opting instead for more commercial theatrical ventures.
Posted by James Armstrong, Playwright at 7:03 PM