Scenes from the Toy Theatre

I have previously blogged about toy theatres. If you follow my posts, you might remember I even have a toy theatre of Great Expectations by Charles Dickens, and recently acquired reproduction plates for a toy theatre of another Dickens novel, Oliver Twist.

Well, I recently acquired through the wonders of the Internet some authentic vintage toy theatre plates. Most of them were published by Pollock's, a printing firm that reissued a bunch of older designs starting in the 1870s and that lasted well into the 20th century. Here's a Pollock's backdrop for a play called The Brigand: 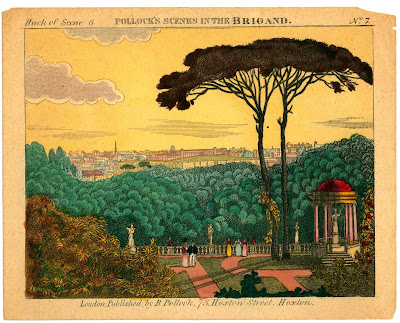 Many of the toy theatres were designed to mimic the popular Christmas pantomimes, which usually were send-ups of classic fairy tales like Cinderella. Here's a scene plate for a toy theatre version of Cinderella. Notice, you could cut out the minute hand on the top and place it on the face of the clock. That way, someone manipulating the toy theatre could move the clock ever closer to midnight. To add a greater sense of depth, people could also cut out wings and place them on the sides an inch or two in front of the backdrop. Pollock's wasn't the only manufacturer, of course, and these sides were published by J.K. Green and sold by J. Redington (who was actually the father-in-law of Benjamin Pollock). Notice, the sides were meant to be used for a variety of different plays. 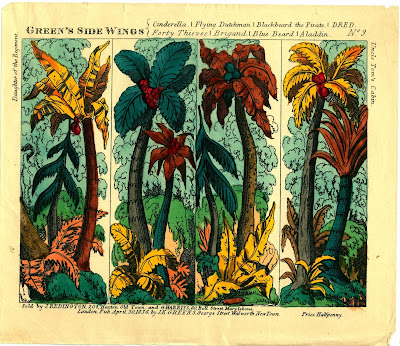 Sometimes you get a miscellaneous plate like this one, with lots of scene pieces that could be cut out and used on different parts of the toy stage. No matter how they were used, they were pasted to some sort of backing, often thin cardboard or pasteboard, and then placed within the toy proscenium. 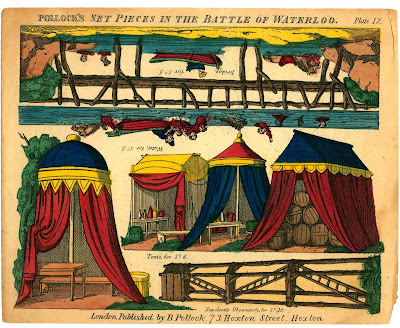 Unfortunately, I didn't get any character plates, but maybe I'll find some for sale one day!