I frequently write about nineteenth-century British actors on this blog, but today I'm going to write about a bygone performer from France, instead.

His name was Nicolas Levasseur, and for a while now, I've kept a postcard of him on my bookshelf. You can see him below in the role of Bertram in Giacomo Meyerbeer's 1831 opera Robert le Diable. 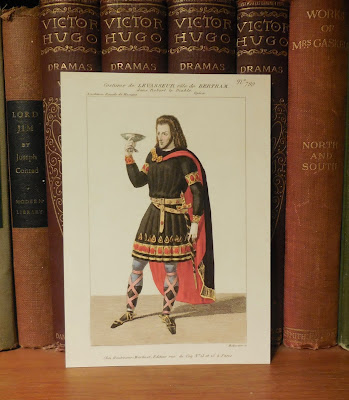 The postcard comes from the Victoria and Albert Museum in London and was given to me on the basis of a bit of a misunderstanding, since I am quite interested in the play Bertram by Charles Robert Maturin. Whoops! Wrong Bertram.

No matter. He's still a striking figure. But if I'm going to display his postcard on by bookshelf, I probably should know a bit about him. I mean, other than his living from 1791 to 1871 and making his debut at the Paris Opera in 1813 and that sort of a thing, since anyone can find that out from Wikipedia. Like I did.

No. What's really interesting to me is his performance in Robert le Diable. The Meyerbeer opera had a libretto by Eugène Scribe and Germain Delavigne. It told the story of Robert, Duke of Normandy, a notorious party boy who drank, gambled, and womanized to his heat's delight. In the first act, however, his foster sister Alice warns him against a mysterious companion. That companion was Bertram, originally played by Levasseur.

And who is Bertram? Well the title of the opera should give you a clue. He's Robert's long-lost father who is in league with demonic forces. His plan is to get Robert to sign away his soul to the devil so he can be with his son forever. (See? Family values!) Alice overhears the plot, though, and ends up saving the day.

Levasseur played plenty of other roles, too. The V&A has images of him in the role of Marcel in Meyerbeer's Les Huguenots and Bazu in Fromental Halévy's Le Drapier. Neither role is quite as diabolical as Bertram, though.
Posted by James Armstrong, Playwright at 6:36 PM