I previously wrote about the effects of the Licensing Act of 1737, which brought broad censorship to the British stage in the 18th century, and continued to hold back playwrights well into the 20th century.

Comedies like John Gay's The Beggar's Opera and the rollicking satires of Henry Fielding had drawn the ire of Robert Walpole, Britain's first prime minister. He was determined to make sure he would not be made fun of onstage. The Licensing Act silenced the laughter, and comic writing migrated from the stage to the novel.

In the wake of this massive new censorship law, what comedies were produced? Now that political theatre was effectively banned, what could the playhouses of the Georgian era actually stage? What were the comic plays they put on, over and over again, which proved to be the most popular? The answer is: virtually nothing new.

From 1737 to the end of the eighteenth century, all of the top ten most performed comedies in London were (with one important exception) revivals from earlier eras. I recently came across a list of these comedies, and I found some of the names on it quite unexpected. Here they are in reverse order:

10. The Alchemist by Ben Jonson. Jonson's reputation once exceeded that of Shakespeare, though his works are seldom performed today. Personally, The Alchemist is my favorite of his, and in the 18th century it out-ranked all of his other comedies, as well as all but two comedies by Shakespeare.

9. As You Like It by William Shakespeare. One of the Bard's two comedies to top Jonson was this perennial favorite. Now that women could perform on stage, Rosalind was a wonderful opportunity for actresses to show off their legs in perhaps the greatest cross-dressing role of all time.

8. School for Scandal by Richard Brinsley Sheridan. That's right - Sheridan's classic play was the only new comedy to break into the top ten, and it didn't premiere until 1777. For 40 years, the comic well ran pretty dry for the British stage, and even Sheridan barely made it onto the list.

7. The Recruiting Officer by George Farquhar. This 1706 comedy tones down some of the bawdiness of the Restoration, but still has plenty of laughs. I saw New York Classical Theatre do the show a few years back, and I can attest that it still works.

6. The Busy Body by Susanna Centlivre. For those who think there were no female playwrights before Wendy Wasserstein, this 1709 play should be a wake-up call. Though Centlivre is not performed much today, she once outranked Sheridan!

5. The Tempest by William Shakespeare. This late Shakespearean comedy has always been a favorite. Some recent productions in New York have occasionally missed the mark, though I rather enjoyed this summer's production by The Classical Theatre of Harlem.

4. The Provoked Husband by Colley Cibber and John Vanbrugh. You haven't heard of this 1728 play? I can't say that I'm surprised. I've never read it myself, but it once outranked all of Shakespeare's comedies!

3. The Beaux' Stratagem by George Farquhar. This 1707 play is probably Farquhar's best known, so it should come as no surprise it ranked so high. It received 419 performances in London from 1737 to 1800. As You Like It by comparison received only 264 over that same time period.

2. The Conscious Lovers by Richard Steele. This sentimental comedy edged out The Beaux' Stratagem with 434 performances in London from 1737 to 1800. It was no match for the era's top play, however.

1. The Beggar's Opera by John Gay. In spite of the Licensing Act, a ballad opera savagely attacking Robert Walpole and his policies remained (by far) the top comedy in the wake of the new censorship law. The Beggar's Opera had 875 London performances from 1737 to 1800, far more than any other comedy. Though the play was one of the chief causes of the Licensing Act, Walpole couldn't stop performances. It was already an audience favorite. 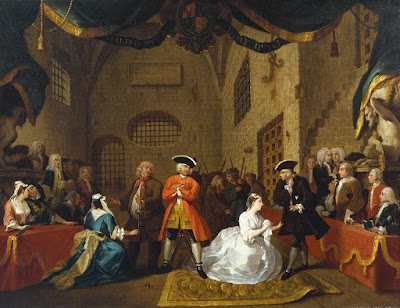 Posted by James Armstrong, Playwright at 9:06 AM