Kabuki at the Met

We're now in the Year of the Tiger, and when I visited the Metropolitan Museum of Art today, they naturally had an exhibit on tigers in art. I was much more interested, however, in some works featuring kabuki performances in their rotating exhibition "Japan: A History of Style."
The Met owns a rare screen that shows a performance from kabuki's early days, when it was only women who performed roles on stage. Though the theatrical style of kabuki was invented by Okuni and pioneered by her fellow priestesses, men later took it over and women were banned from the stage.
In the first panel of the screen, we see audience members approaching, and a street performer is dancing on some mats on the ground. This is likely how kabuki began, with solo performances outdoors, gradually attracting larger and larger crowds. We also see a man beating a drum, providing the musical accompaniment that became crucial to kabuki performances. 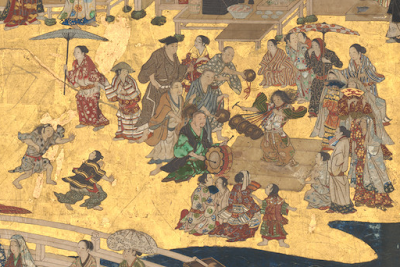 The next panel of the screen shows not only people headed for the performance, but vendors selling refreshments. During the early days of kabuki, people ate, drank, and socialized while they watched the play. Food and tea have remained a part of the kabuki experience, which should not be surprising, since lots of theatrical traditions encourage the audience to eat and drink either during the show or during an intermission. 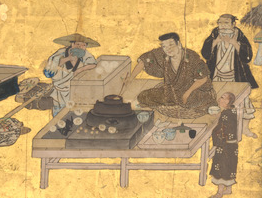 In the following panel, a group of people crowd around a gate, attempting to gain admittance to the outdoor staging area. Though kabuki later moved indoors, during the early years, it was performed outside, but there were sometimes walls erected to control who would or would not be allowed inside. A group of men on the screen seem to be fighting just outside the gate. Are they fighting to get in to see the show? Or have they been ejected from the performance? 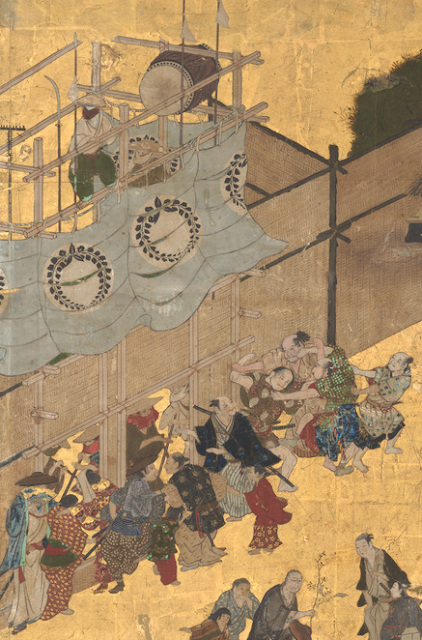 Inside the gate, we see the audience. Most people are seated on the ground, and it appears that their focus is not solely on the stage. They eat, drink, and chat while also enjoying the performance. There is also an elevated seating area, something that can be seen in other early depictions of kabuki as well. The people higher up in these box seats appear to be of a higher class, in addition to being literally higher than everyone else. It's also interesting that other audience members are watching from the shade beneath the boxes. 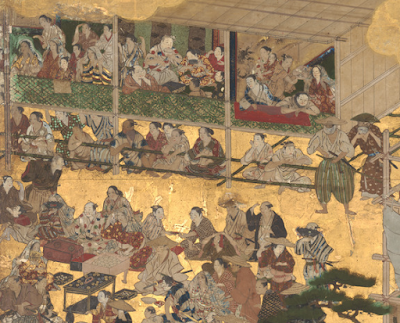 Finally, we get to the stage itself, which thrusts out into the audience, and is surrounded by spectators on three sides. The stage is covered by a roof, as the traditional stage in Noh drama is. The central figure on stage is a woman impersonating a samurai. Ahead of her is a comic servant, Saruwaka, known as Young Monkey. Though the character is a man, a woman would have played this role, too, during the early 17th century. The gents in this play have come to a "tea house" that also doubled as a brothel. These early plays were quite ribald, and they mocked the samurai class, which might have been one of the reasons the government later banned women from performing. 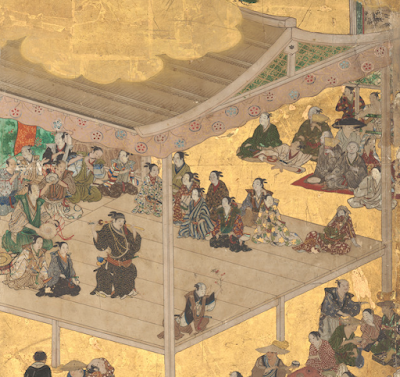 The final panel of the screen shows the bridge leading away from the stage. In Noh drama, the bridge is known as the hashigakari, and it is likewise placed at the back of the stage. Later on, kabuki moved the bridge to the front of the stage, where it extends out over the audience and is known as the hanamichi. I find it interesting to see how the early kabuki stage more closely resembled the Noh stage than it does today. On the Met's screen, you can also see some actors preparing backstage, behind the bridge and its hangings. 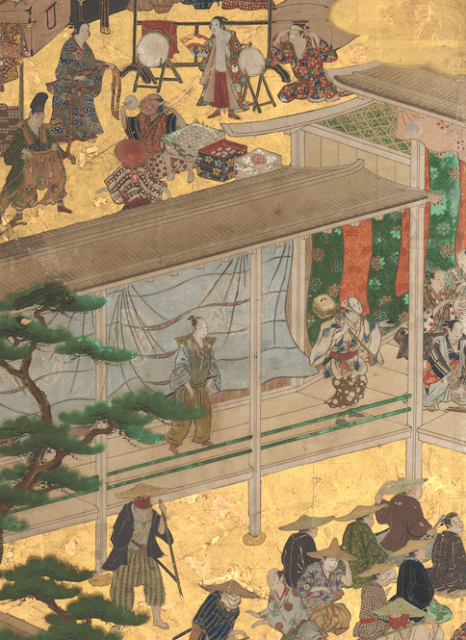 If you want to see how the kabuki stage developed later on in the 18th century, the exhibition also includes a woodblock print by Okumura Masanobu showing a kabuki performance from 1748, now indoors and with the hanamichi going across the audience. There are also audience members elevated on the side, as we saw on the earlier screen. 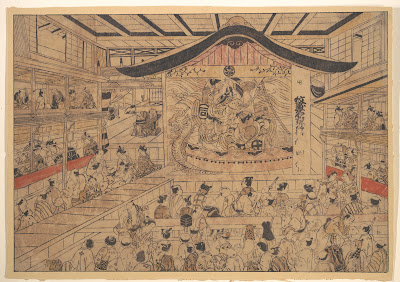 Eventually, kabuki became big business. Here's a print from a bit later, around 1780, showing the theatre district in Edo on the night when the kabuki season opened with the "face-showing" known as the kaomise in which the whole company of actors would be introduced to the audience. 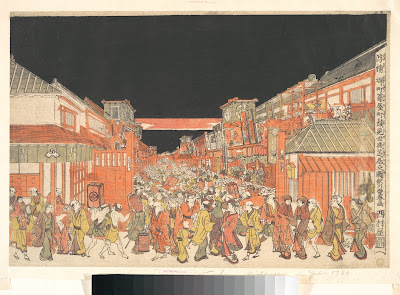 These are only a few of the works you'll see in the exhibition at the Met, which runs until April 24th. It's well worth checking out if you get a chance!
Posted by James Armstrong, Playwright at 7:26 PM