Sor Juana at the Grolier Club

In September, Red Bull Theater Company sponsored a virtual reading of the play Love is the Greater Labyrinth by Sor Juana Ines de la Cruz and Juan de Guevara. That play is just one of the many works by Sor Juana, a 17th-century nun from "New Spain" (now Mexico).
If you happen to be around the Grolier Club in Manhattan, they currently have a free exhibition called "Treasures from the Hispanic Society Library" which showcases, among other things, some of the early printed work by Sor Juana. She was particularly well known for her Villancicos, dramatic carols sung in Spanish inside the cathedral on feast days.
Generally, only works in Latin could be performed in the cathedral repeatedly, so each year a new Villancico had to be composed for each feast day celebration. Being written in the vernacular, the pieces were meant to appeal to all classes of people, including not just colonists of Spanish descent like Sor Juana herself, but also Indigenous people, enslaved people of African descent, and those of mixed background.
Many of Sor Juana's Villancicos use conventional dialects and smatterings of Indigenous languages to note the differences among the diverse population coming to the cathedral, but the works always emphasize the commonality of the worshippers, who are equal in the sight of God. In a Villancico written for the Feast of Saint Peter, for instance, after several verses, a Black man enters, playing upon a gourd and proclaiming salvation for those who have been enslaved. Then, an educated Spaniard with a heavy Castilian accent enters, sprinkling his speech with Latin. Then a Mestizo singer come on, speaking both Spanish and Nahuatl.
Sor Juana had already anonymously published three other Villancicos when her Villancico for the Feast of Saint Peter was published in 1677, but it was the first printed work to actually bear her name. There are only two copies of this printing known to exist, one of which you can see on display at the Grolier Club: 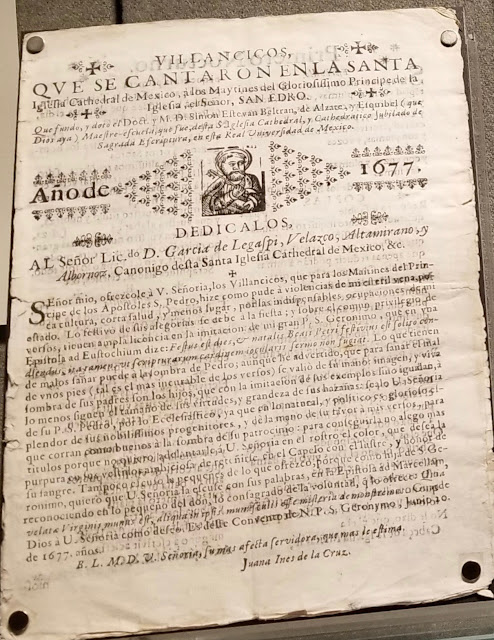 Sor Juana was equally known for her secular verses. In fact, the 20th-century Mexican poet Octavio Paz later identified her as the Founding Mother of Latin American poetry. Here's a picture of a book of poems Sor Juana published in 1689, including some rather biting indictments of the foolishness of men: 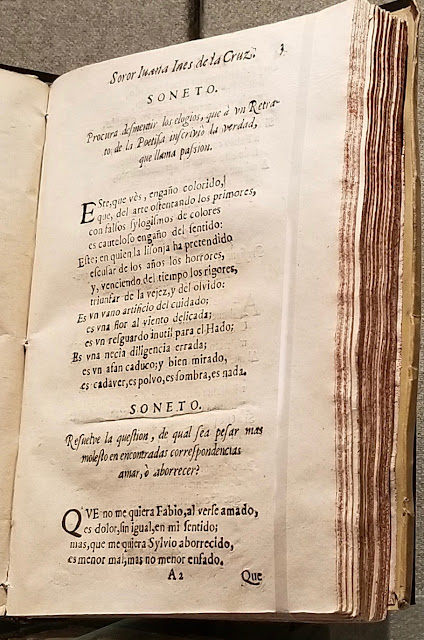 Perhaps Sor Juana's most well known work, however, is her religious play The Divine Narcissus. She famously added to this allegorical drama a loa, or introductory piece, which was conventionally quite simple, but in Sor Juana's hands, the loa grew into a full one-act play, in this case staging the conquest of America and the conversion of Indigenous people. The Divine Narcissus was originally published in Madrid as part of a collection of her work, but it was subsequently printed in Mexico City in 1690. 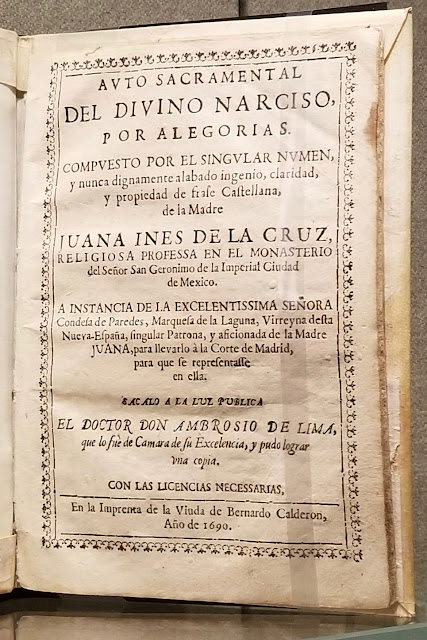 The exhibition at the Grolier Club is running until December 18th, so if you haven't seen it, make your plans to go soon. Tickets are free, but they ask that you make reservations in advance and bring proof of vaccination.
Posted by James Armstrong, Playwright at 12:10 PM