By law, playwrights are forbidden from unionizing. Since we license performance rights rather than sell them outright, technically, we're management.
Do playwrights feel like management? Absolutely not. But we don't have the same rights as labor, either. Recently, actors took to the streets to protest (among other things) a certain abusive producer. Why did the Dramatists Guild remain silent? It had to. If the Guild had called for collective action against a particular producer, it would have run afoul of anti-trust laws.
"Oh, come on," you might say. "It's not like producers are going to sue the Dramatists Guild under anti-trust laws." Except that they have. Twice. Both times, the courts ruled we could keep the Guild, so long as its model contracts and recommendations remained merely advisory. That means the Dramatists Guild provides symbolic solidarity, but has little real power.
Essentially, playwrights are a part of the gig economy, freelancers without collective bargaining power. However, that could change... at least a little bit. For years, the Guild has advocated for special legislation allowing us to unionize. Not surprisingly, it's gone nowhere. Dramatists are not exactly a powerful lobby in Washington, DC. However, another bill currently before Congress could improve things considerably.
The Protecting the Right to Organize (PRO) Act would amend the 1935 National Labor Relations Act to allow independent contractors to act collectively. Though the bill would not make the Guild a union, and dramatists would still not be considered employees, the proposed legislation would provide the Dramatists Guild with exemptions from certain anti-trust laws.
What would that mean on a practical level? Playwrights would legally be allowed to negotiate collectively and advocate for minimum payments, or even for pensions and healthcare, which we are generally left to figure out on our own. The bill would also protect our right to share information regarding how much we are paid and to report incidents of harassment.
Most relevant to recent events, the law would allow the Guild to put abusive producers on a Do Not Work List, something we are absolutely forbidden from doing now. The PRO Act wouldn't solve all of our problems, but it would certainly be a good start. 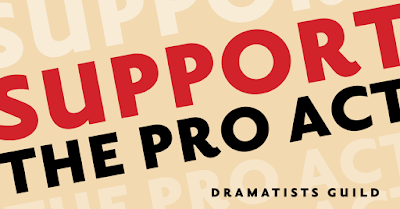