Theatre cannot be killed. You can try to murder it, but it will not stay quietly in its grave. That is the lesson of Blessed Unrest's new production of Tennessee Williams' Battle of Angels.

Indoor theatre is still illegal, though some companies, like Shakespeare Theatre of New Jersey, are producing theatre outdoors. They'll be putting on three short pieces by Bernard Shaw next month in Florham Park, which I wish I could see, but Florham Park isn't the most accessible place to get to by public transportation. That's why I was excited to get an e-mail from Blessed Unrest about their outdoor production of Battle of Angels this weekend.

Blessed Unrest has been around for the past 20 years, and I fondly remember the production they did of Shakespeare's All's Well That Ends Well not long after I moved to New York. Though they might not have the budgets of larger theatre companies, they have the creativity to come up with ways to produce memorable performances even when facing difficult circumstances. Well, COVID-19 has created some of the most difficult conditions imaginable, but this can-do company has figured out how to still produce live drama.

And how is that? Well, you have to be outside, of course, which is why this production is in Central Park. If you make a reservation, the company will tell you where to meet them. They'll also ask you to download an audio file to a cell phone or MP3 player. When you show up at the park, with your audio device and headphones, you can sit on the ground or stand if you'd rather, and watch the actors perform while their dialogue plays in your ears. The stage manager helps the audience to synchronize their devices, and then the audio perfectly accompanies the show.

"Show" is perhaps a better term than "play" since the performers dance their roles rather than just act them. We don't have to worry about lip-synching, since the performers are all wearing masks for safety anyway. However, their physical movements suit the emotionally charged nature of Williams' play. The audio also supplies important stage directions (voiced by the actors) when characters light cigarettes or perform other tasks not particularly suited to mask-wearing. The audience gets to also hear music, sound effects, and artificially altered voices that enhance the experience.

There are some drawbacks to the method. Since this is a busy part of Central Park, the audience hears buskers performing right next to the performance. The company invites the audience to embrace this cacophony, since there is no way around it. I also didn't bring a towel to sit down on, which might have been a good idea, but you can bring one if you see the show Saturday or Sunday night at 6:30.

How do you make reservations? E-mail info@blessedunrest.org and tell them if you want to come on Saturday or Sunday. They do suggest a $25 donation, but the show is well worth it, so please support these talented and courageous artists. 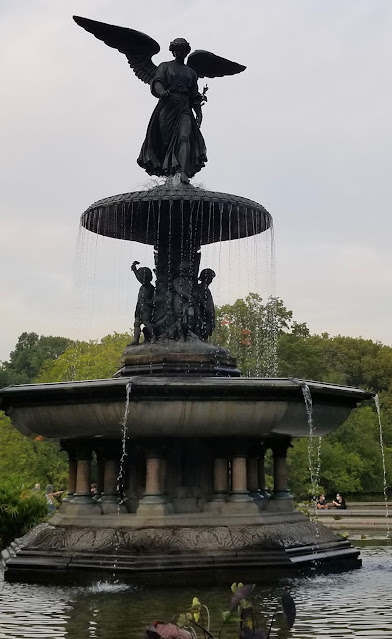