Nigerian playwright Wole Soyinka studied at the University of Leeds in the United Kingdom, so he was already at home in the U.K. when the Royal Court Theatre premiered his early play The Lion and the Jewel in London in 1959.

An English-language verse comedy of Shakespearian proportions but dealing with the traditional culture of Soyinka's own Yoruba people, The Lion and the Jewel blends together European and African traditions to deal with the conflict between modernization and traditional culture. Sidi, the jewel of the village, gets her picture published in a magazine and comes to think of herself as too good for any of the local men, but she ends up falling for Baroka, an aging leader who is the lion of his community.

Soyinka's play A Dance of the Forest premiered in Nigeria's capital city of Lagos on October 1, 1960, as the new nation celebrated its official first day of independence. Soyinka also started an influential new theatre company that year, the 1960 Masks, which sought to create a distinctly national theatre for Nigeria. Though ethnically Yoruba, Soyinka chose to write in English both to create a unified national theatre that could transcend tribal divisions within the country, and to appeal to an international audience.

The writer's Yoruba heritage still comes through in his plays, though. This is especially true of his 1964 drama The Strong Breed, which is centered around the Yoruba masquerade festival of Egungun. During the festival, an individual designated as a "carrier" is expected to carry all of the evil in the area away from the community. The Strong Breed shows a conflict between the individual and the community come to a head during a celebration of Egungun that does not go as planned--and with tragic results.

The year after he wrote The Strong Breed, Soyinka was arrested for going into a radio station and replacing a tape of a speech by a government official with a tape accusing officials of election fraud. He was held by the government for months, and only released following protests by the international community. His arrest did not stop him from continuing to write plays critical of the authorities, but a greater crisis arose in 1966 when a military coup led to a bloody civil war. During that period, Soyinka was jailed for an even longer period.

Ironically, while he was languishing in prison, Soyinka's plays were achieving international success around the world, including a New York City production of The Trials of Brother Jero. The play pokes fun at a corrupt seaside prophet in Nigeria who cynically uses Christianity to promote his own interests. After a military dictatorship took hold of the country, Soyinka penned a darker sequel, Jero's Metamorphosis, in which the characters in the earlier play align themselves with a murderous government to continue to enrich themselves.

Nigeria's brutal political situation also came through in adaptations Soyinka wrote of Western classics, including The Bacchae of Euripides and Opera Wonyosi, the latter of which reworks Bertolt Brecht's The Threepenny Opera (itself an adaptation of The Beggar's Opera by John Gay) with topical references to contemporary Nigeria. His 1971 play Madmen and Specialists bitterly probes Nigeria's civil war, and had to be written while the author was living in exile due to the country's difficult political situation.

Perhaps Soyinka's most famous work, however, is Death and the King's Horseman. The piece is based on real events that took place under the period of British colonial rule and shows the futility of attempting to force people to change tribal customs. The play greatly increased Soyinka's international profile, and in 1986 he was awarded the Nobel Prize for Literature, the first African writer to be so honored. Since winning the award, Soyinka has continued to write, including penning the radio plays A Scourge of Hyacinths and Document of Identity. He has also continued to voice his opinions on a variety of political issues inside and outside Nigeria. 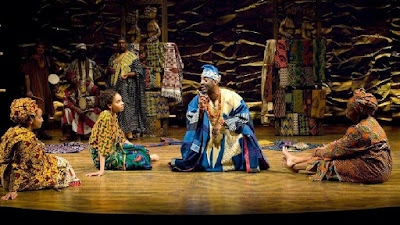 Posted by James Armstrong, Playwright at 8:39 AM