Athol Fugard was born in South Africa of Dutch and British descent, so being white, he enjoyed tremendous privilege at the time. Over and over again in his plays, however, he rebelled against the various privileges he had and pressed for social change.

Prior to 1994, South Africa had a strict system of racial segregation (known as apartheid). Under this system, people of different racial groups were forbidden from appearing on stage together or even sitting in the same auditorium together. These prohibitions were openly defied by South Africa's Market Theatre in Johannesburg, which produced many of Fugard's plays.

Fugard's early play Blood Knot was first produced not in a theatre at all, but in a rehearsal room of the African Music and Drama Association in 1961. The play tells the story of two brothers who have the same black mother, but different fathers. Fugard played a light-skinned brother who passes for white, while the black actor Zakes Mokae played his dark-skinned brother who goes to work every day to support both of them. Not only was it illegal for Fugard and Mokae to appear together on stage, but the play began with Fugard bathing Mokae's feet, an action that infuriated authorities. The production was shut down after a single performance.

In the decades to come, Fugard continued to write plays in which actors of different races appeared together. As if that were not enough to earn him the enmity of the government, his plays explicitly attacked the apartheid system. His 1969 play Boesman and Lena deals with two mixed-race characters who have no place in South African society and must walk from town to town.

Together with the actors John Kani and Winston Ntshona, Fugard wrote Sizwe Bansi Is Dead, which became an international success. The trio later wrote The Island (which takes place in the notorious Robben Island prison which held Nelson Mandela as well as other political prisoners) and Statements After an Arrest Under the Immorality Act.

Fugard's most famous play, the semi-autobiographical "Master Harold"...and the Boys, was banned in South Africa, so it premiered at Yale Repertory Theatre in 1982. His 1989 play My Children! My Africa! showed a black student and a white student attempting to have a civilized debate while violence is raging outside the school where they are. That play was allowed to be performed in South Africa, but by then, apartheid was losing its grip on the nation. After the historic election of 1994, Fugard explored the transition to freedom in such plays as Valley Song, Sorrows and Rejoicings, and The Painted Rocks at Revolver Creek.

Below is a picture of the Signature Theatre Company's production of The Painted Rocks at Revolver Creek. The play tells the story of an artist who feels compelled to paint designs on boulders in spite of his society seeming to fall into chaos. I suspect the central character has a bit in common with Fugard himself... and perhaps he can provide a model for us as our own society falls apart that the seams. 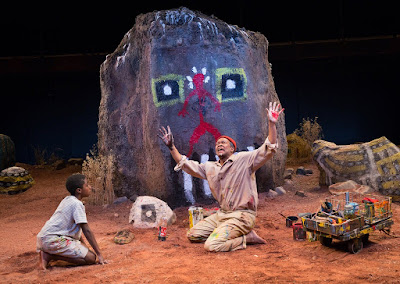 Posted by James Armstrong, Playwright at 7:19 AM