Today, we had our first rehearsal for my short play Burns Night, which will be performed next month at the Long Island City One-Act Festival at the Secret Theatre in Queens. 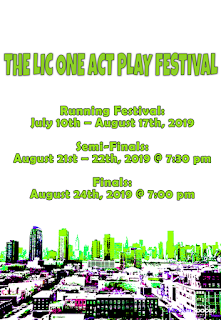 Burns Night originally had a staged reading as part of the January Plays at Urban Stages. Ilanna Saltzman, who directed the reading, is directing the full production at the Secret Theatre as well. Maria de Vries will be reprising her role as Keira, while Alice Hale will be playing Steph and Zach McCoy will be playing Malcolm.

It's great to work with Ilanna and Maria again, and I'm psyched about getting to work with Zach and Alice as well. Last year, Zach was in a reading of The Love Songs of Brooklynites, and while I've never worked with Alice before, I'm a big fan of her web series Northbound.

Burns Night tells the story of two young women who have been friends for forever. They hide out in a kitchen while a celebration of Robert Burns and all things Scottish starts to go overboard. But as their lives and interests change and as romantic entanglements become more intense, can their friendship still stay what it used to be?

I hope you can make it, and if you come, we promise not to feed you haggis!
Posted by James Armstrong, Playwright at 7:07 PM