Last week, I saw Shake & Bake: Love's Labour's Lost in the meatpacking district. Of all the creative adaptations of Shakespeare's bitter-sweet comedy about love and loss, this is the most original I've ever attended, and it's well worth seeing. 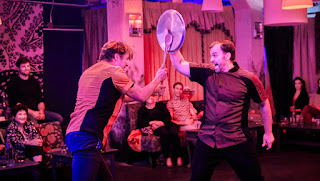 The space on Gansevoort Street that houses the production (and previously had been a succession of pop-up stores) is intimate and elegantly decorated. The audience lounges around in the lobby, then is led into the performance space where the actors will also be serving them dinner.

Yes, that's right. This is dinner theatre with a twist. Where else can you have the King of Navarre prepare artisanal tacos right in front of you? In this production, you'll be literally wined and dined by Shakespeare's characters. (And they don't skimp on the alcohol, either.) The amazing cast is constantly in motion, delivering fast-paced witty dialogue, engaging in nearly acrobatic feats of physical comedy, and providing a tasting menu right to your table.

The performance area is set up in the round, with couches, chairs, and tables circling the action. A little bit behind them are some stool seats that are half price. While I didn't sit in them, they looked like they had perfectly good views, if you're looking to save money. Nothing in the meatpacking district is cheap these days, but you can be assured of both quality food and quality acting.

Darren Ritchie and Victoria Rae Sook lead the cast as the King of Navarre and Princess of France respectively. I first met Ritchie back in my Carnegie Mellon days. He played a mean guitar back then, and has since gone on to multiple Broadway credits, including playing Jonathan Harker in Frank Wildhorn's musical Dracula. He's back on the guitar again in Love's Labour's Lost, and is credited with supplying original music for the piece.

Sook I was not familiar with, but she gives an exceptional performance as the King's love interest, and was also one of the show's three co-creators. She provided the movement direction, which is one of the more sensational parts of the show. We get to see the King use kitchen implements to have a sword fight with his friend Berowne (played by Matthew Goodrich), and Berowne's love interest Rosaline (played by Mary Glen Fredrick) spin on a wheeled table to the utter delight of the audience.

The other two creators are director Dan Swern and executive chef David Goldman. Both do an excellent job, as did the production designer, Shawn Lewis, who managed to make even the bathroom Instagram-worthy. (The woman ahead of me in line for the toilet apologized for being in so long, explaining that she had to take pictures!)

Tickets are on sale through the beginning of January, so make sure you go!
Posted by James Armstrong, Playwright at 8:42 AM