Ben Jonson quipped that his friend William Shakespeare had "small Latin, and less Greek." It's true that Shakespeare must have been familiar with Ovid's Metamorphoses in the original Latin, but other than that, Johnson seems to have been right. 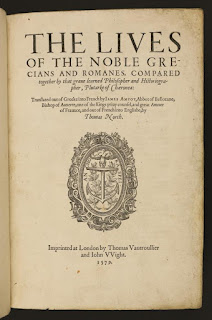 Fortunately, by the end of the 16th century, people in England didn't have to be able to read Latin and Greek in order to have access to the classics. Many of Shakespeare's plays are based on the ancient historian Plutarch. In order to read Plutarch, the playwright simply read an English version by Thomas North, which North had translated from a French version of the original Greek.

How do we know Shakespeare read North's translation? He borrowed heavily from the language he used. In Antony and Cleopatra, for instance, Shakespeare takes North's description of Cleopatra's barge, and just tweaking a word here and there, turns it into iambic pentameter and makes it fit the verse form he wants. Passages in Julius Caesar might not be quite as close, but they still betray a direct debt to Plutarch, and in particular to North's rendering of Plutarch into English.

Consider this famous passage from Act I of Julius Caesar:

Let me have men about me that are fat,
Sleek-headed men, and such as sleep a-nights.
Yond Cassius has a lean and hungry look.
He thinks too much. Such men are dangerous.

Compare that to this prose passage in North's translation of Plutarch:

Caesar also had Cassius in great jealousy, and suspected him much: whereupon he said on a time to his friends, "what will Cassius do, think ye? I like not his pale looks.... As for those fat men and smooth-combed heads," quoth he, "I never reckon of them; but these pale-visaged and carrionlean people, I fear them most," meaning Brutus and Cassius.

Shakespeare's version is better, but it borrows key words, including look(s), fat, men, (carrion)lean, and head(ed).  The syntax is changed, but the meaning is essentially the same. Shakespeare knew when to borrow good material, but he also understood how to reshape it to turn what was good into something better.

Cowards die many times before their deaths;
The valiant never taste of death but once.
Of all the wonders that I yet have heard,
It seems to me most strange that men should fear,
Seeing that death, a necessary end,
Will come when it will come.

Here's what it says in North's translation of Plutarch:

And when some of his friends did counsel him to have a guard for the safety of his person, and some also did offer themselves to serve him, he would never consent to it, but said: "It was better to die once, than always to be afraid of death."

Shakespeare elaborates on the quote in the original, expanding it into a meditation on the subject of death and bravery. A simple aphorism becomes a moment of philosophical reflection. Shakespeare didn't always expand upon his material, though. One of the most chilling moments in Plutarch's story of the assassination of Caesar is this:

Furthermore there was a certain soothsayer that had given Caesar warning long time afore, to take heed of the day of the Ides of March, (which is the fifteenth of the month), for on that day he should be in great danger. That day being come, Caesar going unto the Senate-house, and speaking merrily unto the soothsayer, told him, "the Ides of March be come:" "so they be," softly answered the soothsayer, "but yet are they not past."

The play relates this exchange with remarkable brevity:

CAESAR: The ides of March are come.
SOOTHSAYER: Ay, Caesar, but not gone.

It seems that everything has been done already in one way or another. Playwrights always use source material. Shakespeare just seems to have been able to use his better than most. When he found gold, he polished it. When there was a nugget of precious material, he mined it further until he found what he wanted. And when he came across a gem, he chipped back at it until he uncovered a heart that sparkled all the more brilliantly.
Posted by James Armstrong, Playwright at 3:41 PM