Farinelli and the King

Last night I saw Claire van Kampen's play Farinelli and the King at the Belasco Theatre. The show originated at the Sam Wanamaker Theatre in London, where last year I saw The Secret Theatre. Like all the plays at the Wanamaker, this piece is lit by candlelight, which is quite impressive to see in a big Broadway house like the Belasco. 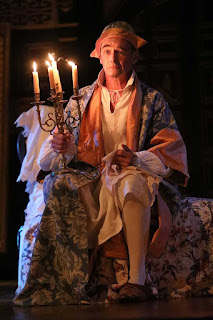 Of course, the Belasco is not completely lit by candlelight. (Safety codes probably don't allow that.) Still, every effort is made to reproduce the atmosphere of the much smaller Wanamaker. Fortunately, the Belasco is small enough that even if you sit in the balcony (as I did) you can still have a nice view of the candlelit stage and magnificent period costumes.

Mark Rylance stars as King Philippe V, the Bourbon king who ruled Spain for much of the first half of the eighteenth century. Phillippe was known for his mental instability, which Rylance plays rather deftly. His weakness of mind made many advisors fear he would be dominated by his second wife, the unpopular Isabella Farnese, portrayed here by Melody Grove, who not surprisingly was nominated for an Olivier Award when she played the role in London.

In the play, Isabella patiently tries to deal with the antics of her husband, whom she clearly loves. Nothing seems to work, however, until she secures the services of the famous castrato singer Carlo Farinelli. Sam Crane plays Farinelli in the production, but his voice is provided by two singers, Iestyn Davies and James Hall. The music for the play is magnificent, including harpsichord, violins, cello, Baroque guitar, etc. Certainly, if you're a fan of Baroque music, the play is a must-see.

After the set-up of Act I, the play really finds itself in the second act as the king creates a small retreat in the forest where he lives in Edenic happiness with his wife and the seemingly magical Farinelli, whose music soothes his fits and helps him to recover his strength of mind. An Eden implies a fall, though, and the triad cannot be maintained. After the king dies (rather unexpectedly for this audience member) his beloved Isabella and Farinelli don't know what to do with themselves. Though once a star, the singer retreats into an attic and scorns the world of musical fame. It is as if he cannot get over the beauty and happiness he once had known.

For theatre history fans, the play also portrays John Rich, the English producer who opened the Theatre Royal at Covent Garden in 1732 and ran it until 1761. Simon Jones plays Rich as a harried, impatient manager constantly concerned that yesterday's hit won't pay tomorrow's expenses. Like the rest of the cast, he is a delight to watch.

If you want to see Farinelli and the King, it's only playing until March 25th, so get your tickets soon. For more information, go to: