As I mentioned in a previous post, I recently saw Clyde Fitch's play The Climbers at Metropolitan Playhouse. 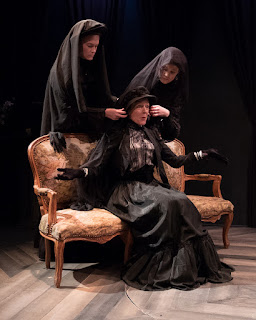 The play is a wonderful depiction of New York social climbers at the beginning of the 20th century. A man risks and loses his entire fortune in a bid to provide for his family in the manner to which they have become accustomed. He dies, and on the day of his funeral, the family discovers they have nothing.

Fitch mines the dark comedy in this absurd situation. It is particularly delightful to watch a pair of women show up the very day of the funeral to see if they can get some bargains by buying the new gowns the family has just purchased in Paris. After all, they'll all have to go into mourning for a while, and by the time they can stop wearing black, the gowns will all be out of fashion, so why let them go to waste?

The scene is doubly funny, because the family is thinking the same thing. Now that they're left with nothing, they need to raise as much money as possible, and what better place to start than by fleecing the neighbors, overcharging them for Parisian fashions? The widow (wonderfully played by Margaret Catov) is anything but grieving during the exchange, but knows precisely which cards to play to get the best price for what she's selling.

Fitch's The Climbers premiered in 1901, three years after his play Nathan Hale about the famous American spy. Metropolitan Playhouse has produced a number of his later works, including The Truth and The City. Fitch also adapted Edith Wharton's novel The House of Mirth, which the Metropolitan Playhouse staged in 2012. Wharton apparently didn't like the play very much, but she and Fitch became friends.

At one point, Fitch had five plays running on Broadway simultaneously. Few people have heard of him today, but the revival of The Climbers proves his works continue to fascinate. If you're interested in seeing the production, check out the theater's website here: