The Other Julius Caesar

Well, The Public Theater's anti-violence Julius Caesar is closed now, having soldiered on in spite of violent threats against the production. Still need your Caesar fix? Fear not, as Access Theater is doing a very different production of the play through July 8th. 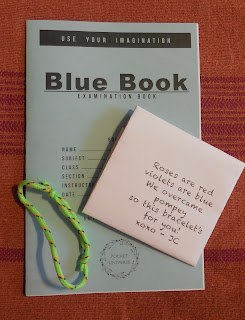 Set in an all-girl's school, the Access production definitely gets points for creativity. The play's program is made to look like a Blue Book in which students take exams. When audience members take their seats, they find a present from the school's reigning Queen Bee, with a sweet little note. Oh, JC! She's so thoughtful.

All-female productions of Shakespeare are nothing new. Phyllida Lloyd famously set Julius Caesar inside a women's prison, and followed that up with similar productions of Henry IV and The Tempest. Lloyd didn't change pronouns (at least not in The Tempest), so a character could be perceived both as male and female at the same time. The Public Theater took a different tact in their Julius Caesar, where Marc Antony (played by Elizabeth Marvel) was referred to as "she" in the play.

Access takes things one step further. Every reference to "men" in the play becomes "girls" while "wives" become close "friends" in this production. Brutus, played by Alyssa May Gold, is an honorable girl. (So are they all, all honorable girls.) As in The Public's production, cell phones come into play, but they are used even more frequently here, as is appropriate for high schoolers. Assassinations and murders resemble public shamings more than actual killings, which makes them either less or more cruel depending on your memories of high school.

The boldest choice in this production, though, is the use of a small cast (only six) with everyone dressed identically. Extensive doubling is of course necessary in this notoriously large-cast play, and director Katie Young sometimes uses the doubling for heightened effect. For instance, Dea Julien, who plays Caesar, also plays Portia, Brutus's wife (now "friend"). Gold, who plays Brutus, also plays Caesar's beloved Calphurnia. The result is to make Julien and Gold's characters seem even closer than Caesar and Brutus are in the play. The actors make little effort to distinguish between the characters, which can be confusing at times, but their interchangeableness is part of the point.

At the end, Brutus's suicide is played differently from all the other deaths, and its realism makes us take the school-girl antics more seriously. Tearing off a friendship bracelet, spreading chalk on a classmate's blouse, or participating in a ritual of mocking laughter isn't actual murder, is it? Except perhaps when the cruelty is excessive, and leads to very real deaths.

Though the Access Theater production is playing through July, seating is limited, so if you want to go, see it while you can. After all, if you miss out, what will you say to all the cool girls who saw it?
Posted by James Armstrong, Playwright at 9:25 AM