I just saw HEDY!, Heather Massie's one-woman show about the life and inventions of Hedy Lamarr. It just opened at the Planet Connections Theatre Festivity, and trust me, you're going to want to see it.

The audience takes a few moments to get into the piece, in part due to setting up the play's conventions (Lamarr is speaking to us from beyond the grave) and in part due to Massie's use of Lamarr's actual accent. Austria-via-Hollywood is not a sound we hear every day, so it takes a bit of time for us to adjust. Once we get into the story, however, Massie takes us on an amazing journey.

Telling the tale roughly chronologically, Massie introduces us to the intellectually curious young woman born Hedwig Kiesler, then to the enchanting stage actress who gained the attention of director Max Reinhardt, then to the scandalous star of the German film Ecstasy, then to the virtually imprisoned wife of munitions magnate Friedrich Mandl, and finally to the Hollywood starlet renamed by Louis B. Mayer as Hedy Lamarr.

Once Lamarr gets to Hollywood the story gets even more interesting. Working with (and briefly dating) the aeronautics tycoon Howard Hughes, Lamarr developed a knack for inventions. Wanting to do something for the war effort, she teamed up with avant-garde composer George Antheil to come up with a secret communications system that could guide torpedoes. They patented their idea in 1942 and patriotically gave the patent to the U.S. Navy, which promptly sat on the idea, not developing the technology until the 1960s.

That development, known as frequency-hopping spread spectrum technology, now allows for all sorts of gizmos we use today, including--as the play points out--cell phones. Well, thanks, Hedy! Now Patti LuPone and I know who to blame for all those jerks texting during shows!

But seriously, if you don't know about Hedy Lamarr's contributions to science and technology, this show will tell you why you should. Not only that, but the production benefits the Intrepid Museum's GOALS for Girls program, which encourages young women interested in becoming leaders in science.

HEDY! is only playing in New York until the end of the month, so get your tickets soon. The production is headed to both the Galway Fringe in Ireland and the Intwasa Arts Festival in Zimbabwe, but this is your chance to see it right here in New York City. 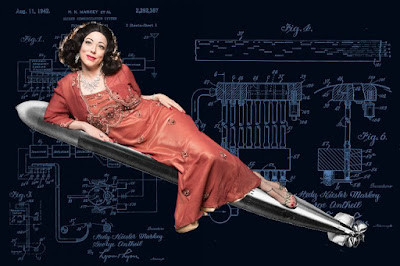