William Congreve is generally known as a comic writer, author of Love for Love and The Way of the World, but the Restoration playwright also penned an important tragedy, The Mourning Bride.

The play begins with Almeria, the Princess of Granada, originally played by Anne Bracegirdle. Almeria is the daughter of King Manuel, but she married Alphonso, heir to the rival kingdom of Valentia. At the beginning of the play, Alphonso is presumed dead, and Almeria (who is in mourning for her husband) is about to be contracted to marry Garcia, son of the scheming noble Gonzalez. She opens the play with this famous passage:

Musick has Charms to sooth a savage Breast,
To soften Rocks, or bend a knotted Oak.
I've read, that things inanimate have mov'd,
And, as with living Souls, have been inform'd,
By Magick Numbers and persuasive Sound.
What then am I? Am I more senseless grown
Than Trees, or Flint? O force of constant Woe!
'Tis not in Harmony to calm my Griefs.
Anselmo sleeps, and is at Peace; last Night
The silent Tomb receiv'd the good Old King;
He and his Sorrows now are safely lodg'd
Within its cold, but hospitable Bosom.
Why am not I at Peace?

The Anselmo here is the last king of Valentia, who after conquering Granada, betrothed his son Alphonso to Almeria. It is Anselmo's tomb that proves to be an important setting later on in the play. There, Almeria meets Osmyn, a noble prisoner originally played by Thomas Betterton. Osmyn, it turns out, is none other than Alphonso in disguise. The reunited husband and wife are ecstatic to see one another alive, but there's a problem. Zara, a captive queen originally played by Elizabeth Barry, has fallen in love with Alphonso/Osmyn. He describes her like this:

She's the Reverse of thee; she's my Unhappiness.
Harbour no Thought, that may disturb thy Peace;
But gently take thy self away, lest she
Should come and see the straining of my Eyes
To follow thee.

Almeria dutifully leaves, and Zara confronts her beloved. Though she is supposed to marry King Manuel, Zara is obsessed with Alphonso. He rejects her, and she resolves upon revenge. At the end of Act III, she has a famous speech expressing her contempt:

Vile and ingrate! too late thou shalt repent
The base Injustice thou hast done my Love.
Yes, thou shalt know, spite of thy past Distress,
And all those Ills, which thou so long hast mourn'd;
Heav'n has no Rage, like Love to Hatred turn'd,
Nor Hell a Fury, like a Woman scorn'd.

In Act IV, Gonzalez begins to puzzle out what has happened. Since he wants his son to marry Almeria, he has to find a way to kill Alphonso. He commands an officer to disguise himself as one of Zara's servants and murder the prince. 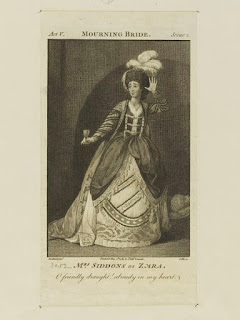 However, King Manuel also figures out what is going on, and wanting an especially cruel revenge on Zara, comes up with a plan to dress in the robes of Alphonso/Osmyn and confront her. Alphonso escapes, and when the king dresses in his robes, Manuel gets murdered by mistake. Zara drinks poison, and Almeria and Alphonso end the play happily.

The Mourning Bride remained popular for a long time. Sarah Siddons famously portrayed Zara in the 18th century, as did Mary Ann Yates and Elizabeth Younger. Sometimes actresses would switch off playing Zara and Almeria, allowing audiences to compare their different takes on the roles.  In the nineteenth century, Harriett Litchfield was famous for playing Zara, but by the twentieth century the play had largely faded away.

Still, if you've ever spoken of "a Woman scorn'd" you were quoting Congreve, even if you didn't know it.

Posted by James Armstrong, Playwright at 11:29 AM