Last night I saw Othello: The Remix at the Westside Theatre off-broadway. I was curious about this hip-hop take on Shakespeare, in part because I saw the four actors who performed it were billed as playing Iago, Brabantio, Roderigo, Bianca, Cassio, Emilia, Othello, and other minor characters... but not Desdemona. 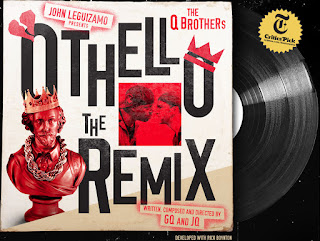 How do you do Othello without Desdemona? Or for that matter, how do four goofy guys portray Desdemona at all?

The answer is they don't. Instead, this production portrays Desdemona as an etherial disembodied voice. While I missed seeing her onstage, it was the only sensible choice for the production.

While the Q Brothers, who created the show, are great as Iago and Roderigo, they wouldn't be able to pull-off a tragic heroine like Desdemona. And while Jackson Doran is wonderful in drag as Emilia, he couldn't do it either.

The mysterious voice of Desdemona surrounds us, and becomes a fitting companion for Othello, played here by Postell Pringle. He manages to give stature to the Moor, in spite of the fact that he has been transposed from being a Venetian general to being an American rap king.

This version makes some interesting connections between the music industry's quest for authenticity and the righteous-seeming malevolence of Iago. In Othello: The Remix, Iago is a rapper with street cred, incensed that the pretty-boy Cassio has been promoted above him. To Iago, this isn't just a matter of petty jealousy. Music is something to die for.

Or more accurately, it's something to kill for....

If you want to see the play, check out its website here: