The I. Miller Building

At the corned of Broadway and 46th Street, in the heart of the hustle and bustle of Times Square, is a hidden gem of theatrical history.

It isn't a theatre, or the office of a bygone stage mogul--it's the old supply company that used to provide Broadway with its shoes. 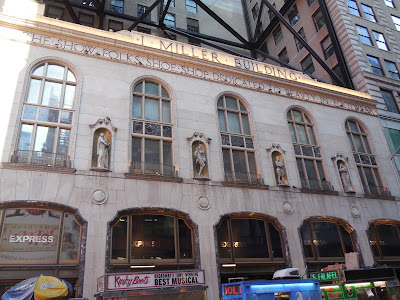 I. Miller used to be the go-to place for theatrical footwear. You can still read the company's motto: "The Show Folks Shoe Shop Dedicated to Beauty in Footwear."

Though the store shuttered in the 1970s, the building remains. For a long time it housed a T.G.I.Fridays. Now an Express clothing store occupies part of the structure. I'm not sure which is more depressing.

But what isn't depressing is that the four statues that adorned the building are still there. Each depicts a famed actress from the early 20th century in a well-known role. (Well-known in the 1920s, that is.) The actresses were chosen in a vote by the public in 1927 to represent the apex of female performance in drama, comedy, motion picture, and opera. You can read about it in an article The New York Times did in 2014.

People often complain about the lack of female statues in New York City. Generally historical figures (Joan of Arc, Eleanor Roosevelt, Golda Meir, Gertrude Stein, Harriet Tubman) are supposed to count, while fictional and allegorical figures (Alice, Mother Goose, Lady Liberty) do not. But where do these statues fit into the scheme? They are all both historical figures and the fictional roles they portrayed. (Of course, they also are on private property, which makes them not count for people just considering statues on public land.)

Representing tragedy is my favorite statue, Ethel Barrymore as Ophelia. We all know Ethel's family (Lionel, John, Drew, etc.) was theatrical aristocracy. She herself played Ophelia in a Broadway production of Hamlet in 1925. (Walter Hampden directed and played the title role.) By that time, the public had already seen her as Nora Helmer in Ibsen's A Doll's House, Juliet in another great Shakespeare tragedy, and a host of other stage roles, as well as on screen in such movies as The Nightingale and The Awakening of Helena Ritchie. She would later win an Oscar for her role opposite Carey Grant in the 1944 film None but the Lonely Heart.

Somewhat more obscure is the next statue, Marilyn Miller as Sunny the circus queen. Not familiar with that comedy? Well, Sunny was the musical hit of 1925. The play boasted music by Jerome Kern and a book and lyrics by Oscar Hammerstein II and Otto Harbach. Miller rose to fame as a Ziegfeld girl in the teens. After numerous memorable performances in the Ziegfeld Follies, and a starring role in the Ziegfeld-produced musical Sally, she broke with Florenz Ziegfeld and went on to star in Peter Pan and later Sunny. Though Miller is mostly unknown today, she was a favorite of the early 20th century, and Judy Garland even played her on screen in the 1946 movie Till the Clouds Roll By about the life of Jerome Kern.

Mary Pickford is known today as America's Sweetheart, the actress who at the age of 26 became Hollywood's first millionaire. Her statue portrays the sex symbol dressed as a little boy for her title role in Little Lord Fauntleroy, the silent film based of Frances Hodgson Burnett's novel of the same name. Burnett is better known for her novel The Secret Garden, but Little Lord Fauntleroy, about a poor American boy who finds out he is heir to a British fortune and an earldom to boot, became a popular film in 1921. Pickford played not only the boy, but also that character's widowed mother. I love the expression not only on her face in this statue, but also on the face of the dog.

Last but not least we come to Rosa Ponselle, the soprano who was a fixture at the New York Metropolitan Opera for many years. The daughter of Italian immigrants, Ponselle got her start in vaudeville. She gained the attention of two great opera singers, Victor Maurel and Enrico Caruso, who arranged for her to audition for the Met. She was cast in the opera's 1918/19 season and went on to star in Le Juive, Ernani, Aida, Don Carlos, and in 1927 Bellini's Norma. It is in the title role of that opera that she is depicted on the Miller Building. The bel canto opera tells the story of a Druid priestess who falls in love with a Roman. The forbidden romance cannot be, and the two end up jumping together onto a sacrificial funeral pyre. Quite a finale!

The statues were designed by the sculptor Alexander Stirling Calder, father of the famous mobile artist. They were recently restored, and now can be seen in their full glory, though few people probably notice them.
Posted by James Armstrong, Playwright at 8:14 AM