I very much enjoyed David Worrall's book Theatric Revolution, so I was excited when I saw the library had a more recent book of his with this provocative title: Celebrity, Performance, Reception: British Georgian Theatre as Social Assemblage. 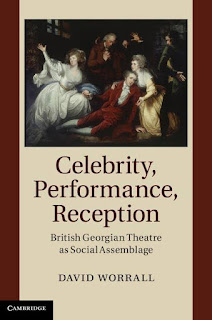 In his introduction to the book, Worrall touches upon closet drama, plays meant to be read at home in your "closet" rather than performed on a stage. Worrall contends that: "Play texts performed at locatable venues have a higher actuality than those which remained read but unperformed unless their population densities can be precisely located.” Without performance, the play cannot impact a social assemblage, even if it moves individual readers.

The book then goes on to explore a number of case studies, one of the most interesting being the actor Edmund Kean, who had a profound impact on many writers of his day. Worrall notes that Kean helped to both shape and generate the reputations of the second wave of Romantic writers in Britain. In turn, their reputations closely shaped his own, with Romantic critics like William Hazlitt contributing to Kean's aura.

Even more interesting than Worrall's discussion of Kean, however, is his discussion of the actress Sarah Siddons. He observes that her professional rise was accompanied by newspaper speculation concerning how much money she made. Siddons was frequently accused of avarice, most famously in a satiric cartoon by James Gillray in 1784. Still, Siddons maintained a great deal of control over how her visual image was presented to the public.

If you're interested in Georgian theatre, Worrall will take you on a tour of some of the lesser known events and controversies of the era. You can get the book from Amazon here: