I teach a theater history class at City College, and yesterday we were discussing commedia dell'arte. I happened to mention that the commedia character Pulcinella, also known as Punchinello, is the ancestor of Mr. Punch of Punch and Judy shows.

"You know," I said. "Punch of Punch and Judy. The puppets. Surely you've seen them."

"For kids," I said, fondly recalling a Punch and Judy performance I had seen years ago while growing up in Florida. "You know those puppets, right? Raise your hand if you've ever seen Punch and Judy."

They had no idea what I was talking about.

"So Punch and Judy are married," I explained. "And Mr. Punch, he has this big stick, and he uses it to beat Judy."

"Um... yes," I continued. "Because you have to teach your kids about wife-beating... I guess. But she beats him back! Sometimes with a wooden spoon." This seemed to make the play okay for the students. "Then he kills Judy, and--"

"Well, yes," I said. "Then she comes back as a ghost and drives him insane. After that, he gets eaten by a crocodile and goes to hell."

"PEOPLE SHOW THIS TO THEIR CHILDREN!?!"

The whole thing made me very sad. When I was growing up, Punch and Judy seemed old fashioned, but I still remember seeing them, and certainly everyone knew who the characters were. Now, I might be part of the last generation (in this country at least) to grow up seeing Punch and Judy. It seems like a centuries-old tradition is disappearing overnight.

Are we unnecessarily sheltering our children today? I mean, if you can't talk with your kids about bludgeoning, murder, and demonic torment, what can you talk with them about?

Perhaps Punch and Judy will be able to find a new audience among adults, historians and hipsters untroubled by the more violent aspects of the play. (Though come to think of it, are there any less violent aspects of the play?) Still, I would like to think that someday Punch and Judy will entertain children again with their wild antics and anarchic contempt for the rules and norms of civilization.

Until then, so long, Mr. Punch. It's been nice knowin' ya. 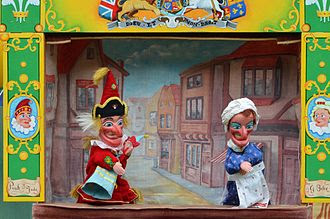