The year 1789--when Parisian mobs stormed the Bastille, breaking into the prison than symbolized the old feudal order and setting its prisoners (and by extension, themselves) free--is an important marker in the history of Western civilization, as well as for Western drama. However, even before the outbreak of the French Revolution, the stirrings of a new outlook toward art began in Germany in the form of the so-called "Storm and Stress" movement. Friedrich Klinger gave the movement its name with his play Sturm und Drang (German for "Storm and Stress"), which premiered in Leipzig in 1777. The previous year, Klinger had submitted his play The Twins to a contest at a theatre in Hamburg, winning first prize and gaining an appointment at the Seyler Theatre Company. The Twins depicts a man who kills his weaker twin, claiming his brother will not allow him to fully develop his own nature. Whether or not Klinger actually embraced such a viewpoint, this type of thinking seemed something entirely new and different to audiences of the day. 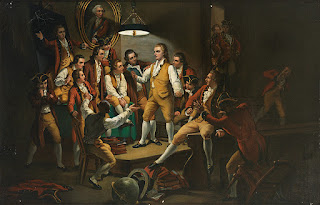 In a Storm and Stress play like The Robbers by Friedrich Schiller, the action produces a series of spectacular events that seem beyond the realm of moral judgment. Schiller's villain, Franz Moor, tricks his father into disinheriting Franz's elder brother, Karl. Egged on by his libertine friend Spiegelberg (whose name indicates he is a mirror--"Spiegel"), Karl leads a band of robbers who wage war on civilization. In the forests of Bohemia, he urges his followers on to victory over a surrounding army, convincing them to fight rather than turn him over to the authorities in exchange for pardon. Karl then returns home to claim his promised bride, only to discover that Franz has imprisoned their father, who was long thought to be dead. During the final act of the play, recognitions and reversals happen with dizzying speed. Though the final moments of The Robbers suggest a return to the rule of law, the play's original audiences were more struck by its compelling action than any putative moral.

Like Schiller, the poet Johan Wolfgang von Goethe began as a Storm and Stress writer, penning such plays as Götz von Berlichingen and Egmont. Heavily influenced by Shakespeare, Egmont marks a turn toward a new style, one that celebrated powerful emotions and political freedom. This new movement, born around the same time as the French Revolution, came to be known as Romanticism. Instead of looking back just to the classics for inspiration, Romanticism valued the vernacular literature of the middle ages and the Renaissance, especially the tales of chivalry and adventure that had come to be known as Romances. No longer valuing just popular sentiment or cold reason, Romanticism sought to remake the world through powerful, intense feeling.

Feeling is never lacking in Schiller's mature Romantic plays Don Carlos, the Wallenstein Trilogy (Wallenstein's Camp, The Piccolomini, and Wallenstein's Death), and Mary Stuart. The plays' skepticism about any type of absolute values can be seen in their ambivalent relationship with religion. In Don Carlos, Catholicism is the symbol of repression while Protestantism represents liberation, while in Mary Stuart the roles of those two religions are reversed. Wallenstein, though it takes place during the religious wars of the seventeenth century, remains aloof from religious questions. Schiller seems less concerned with what people actually believe than with how those beliefs shape them as human beings.

Schiller's later plays, The Maid of Orleans, The Bride of Messina, and William Tell, all reflect the influence of his friend Goethe. Goethe's play Torquato Tasso romanticizes the life of the sixteenth-century Italian poet who--following a difficult relationship with his patron the Duke of Ferrara--was imprisoned in a madhouse. Though Goethe began the piece during his Storm and Stress period, he was ultimately able to reach a higher level of poetic sophistication in the play, marking his entrance into the new style of Romanticism. While working on Torquato Tasso, he was also engaged in writing the drama that would become his masterpiece. In 1808, he finally published the first part of his massive poetic drama Faust. 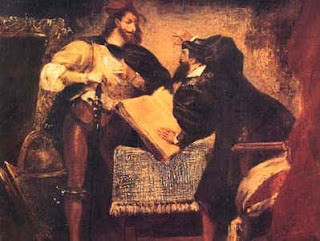 Faust, Part I is the archetypal Romantic drama. Instead of being divided into acts, the play simply has a succession of scenes, with each scene written in a different verse style. Goethe carefully matches the meter and rhyme scheme of each scene to the emotions he is trying to convey. The poetry reaches a crescendo during Walpurgis Night, when Faust joins a group of witches and fantastic beasts celebrating a Bacchanalia in the Harz Mountains. In a dream, Faust witnesses the wedding of the Fairy King and Queen, Oberon and Titania. The following scene, written entirely in prose, shows the gloomy letdown from the event, as Faust realizes he has forgotten his precious Gretchen, the woman he loves. With the aid of his demonic companion Mephistopheles, Faust rushes to free Gretchen from prison, only to find she prefers to die there and be redeemed in the next life rather than to live with Faust and lose her soul.

Other German Romantic playwrights include Johann Ludwig Tieck and Heinrich von Kleist. Like many Romantic writers, Tieck was enthralled by fairy tales. His play Puss in Boots stages the popular children's story in a meta-theatrical manner, with characters constantly commenting upon the action. Kleist was far unhappier, both in his life and his art. His tragedy Penthesilea gruesomely depicts the fatal love of an Amazon queen. Though Goethe thought Penthesilea could never be staged, he himself put on a production of Kleist's comedy The Broken Jug. Kleist's most famous play, The Prince of Homburg, was not staged until after the author's suicide in 1811

After completing Faust, Part I, Goethe underwent a conversion of sorts and renounced Romanticism. Faust, Part II, not published until the time of Goethe's death in 1832, embraces the classical world. Faust convinces the bankrupt Holy Roman Emperor he can raise all the funds he needs by claiming an ancient treasure that has been buried since classical times, hinting at a revival of Germany through an embrace of the values of ancient Greece. The play uses a classic five-act structure, and includes a re-staging of the Walpurgis Night scene, but this time with motifs from Greek and Roman mythology. The third act of the play is a virtual hymn to classicism in which Faust wins Helen of Troy.

Romanticism continued in Germany, in spite of Goethe's later turn toward classicism. Writing after Goethe's death in the 1830s, Georg Büchner gave a Romantic exploration of the French Revolution in Danton's Death. What matters in Büchner's vision of Romanticism is not so much what one's values are, but that individuals dedicate themselves to those values with their entire beings. Büchner's last drama, Woyzeck, left unfinished at the time of his death, looks forward to modernism and later became a staple of twentieth-century theatre.
Posted by James Armstrong, Playwright at 9:13 AM