Last Day of the Shaw Conference

Because I teach on Mondays, I couldn't get to all of the events at the "Shaw in New York" conference today. However, I was able to sneak into the Bruno Walter Auditorium at the New York Public Library for the Performing Arts and hear Gustavo Rodriguez Martin present on the "GeoShaw" project, which will allow people on the Internet to view all the different places George Bernard Shaw and his wife Charlotte traveled during their rather long lifetimes. 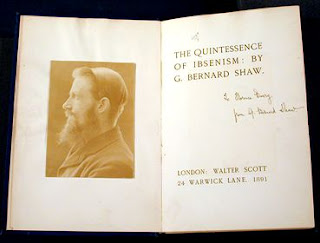 After a lunch break, Joan Templeton gave a fascinating talk entitled "Re-Reading The Quintessence: The Psychological Shaw and Theatrical Modernism." She took a fresh look at Shaw's classic book The Quintessence of Ibsenism, which many Ibsen scholars have tried to degrade. Templeton argues convincingly that Shaw's reading of Ibsen's plays up through Hedda Gabler (the most recent one written when he published the book) is far more sophisticated and nuanced than frequently credited.

I then had to dash for another class I teach, but I was able to meet up with some Shavians later at the concert reading of The Doctor's Dilemma by Gingold Theatrical Group held at Symphony Space. It's a fascinating play, and it was good to hear it well acted.

After that, I had to bid goodbye to all the Shaw scholars, but I hope to see them again soon!
Posted by James Armstrong, Playwright at 8:43 PM