Most cultures have some tradition of puppetry, and puppet plays in Japan can be traced back at least to the twelfth century. For much of Japan's history, puppeteers wandered about the country performing at festivals and displaying their skills for any audiences they might find. Originally, these makeshift puppet plays were called joruri. They featured not only skillfully manipulated puppets, but also chanters who would narrate the story and provide all of the voices. One famous chanter, Takemoto Gidayu, opened a theatre dedicated to joruri in Osaka in 1684. Its first production was a new play called The Soga Successors by a playwright named Chikamatsu Monzaemon. 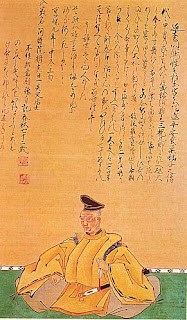 At first, Chikamatsu wrote mainly for the kabuki theatre, providing plays for the star actor Sakata Tojuro. Even before the great actor's death in 1709, however, Chikamatsu began drifting away from kabuki and writing exclusively for puppet theatres. Most kabuki actors were notorious for changing scripts in order to suit themselves, and the style of kabuki lent itself to histrionic performances. Perhaps ironically, puppets were better suited for conveying subtle emotion than the exaggerated and stylized acting in kabuki. More importantly, writers for joruri could count on their words actually being said, rather than having lines cut or completely changed to suit star performers.

Chikamatsu became famous for his love-suicide plays, known as shinju mono. His 1703 play The Love Suicides at Sonezaki was hugely successful and helped to set the standard for the genre. Inspired by true events, the play tells the story of a courtesan named Ohatsu who falls in love with a poor merchant clerk named Tokubei. After Tokubei is swindled and beaten, it appears the unfortunate man will be forced into exile. Rather than live without each other, the couple resolves to commit suicide together.

The most popular of Chikamatsu's plays is The Battles of Coxinga, which originally ran for seventeen months straight. The historical epic tells a story from the twilight of the Ming Dynasty in China. Since Japan was shut off from the outside world during Chikamatsu's day, the Chinese setting would have seemed exotic to audiences. The many spectacles in the play (including a fight with a tiger) seem particularly suited to performance by puppets. Chikamatsu reached back even further into history with his play Fair Ladies at a Game of Poem Cards, which takes place in Japan during the twelfth century.

Many of Chikamatsu's plays dealt with current events, such as The Uprooted Pine, about a recent scandal involving a woman from Japan's highest class of courtesans. He frequently returned to the shinju mono genre as he did with his 1720 play The Love Suicides at Amijima. Though Chikamatsu died in 1725, his friend Hozumi Ikan recalled many of the playwright's ideas in the critical work Naniwa Miyage. According to Hozumi, Chikamatsu wished to "impart to the lifeless wooden puppet a variety of emotions, and attempt in this way to capture the interest of the audience." He succeeded not just for puppets, but for human actors as well, as many of Chikamatsu's plays were later adapted for kabuki as well as for the Western stage.
Posted by James Armstrong, Playwright at 7:39 PM