Yesterday I saw the delightful new children's musical Flight School at the Vital Theatre. Based on a picture book by Lita Judge, the play tells the story of a penguin who wants to learn to fly. What could be cuter than that? 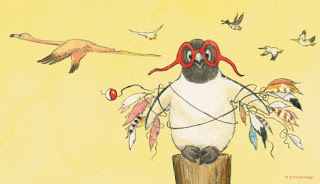 Vital's music adaptation features a book by Cara Lustick and songs by David Mallamud and Joshua H. Cohen. I've long been an admirer of Mallamud's The Strange Affair of Doctor Crippen, and I've worked with Josh on a number of of pieces, including Keep On Walkin'.

The play shows a bevy of birds ready to learn how to fly from Teacher, a flamingo played by Ashtia Jewell. When Penguin, played by Jennifer Smith, arrives by boat, the other birds are skeptical. With a round body and a big belly, Penguins just aren't meant to fly. However, the play teaches children that there is a place for everyone, regardless of body type, and it is refreshing to see a protagonist unapologetic about a large stomach.

Mallamud's music is recorded, not live, but that didn't seem to phase the children in the audience. Penguin forms a friendship with a bookish owl (played by Alie B. Gorrie) that warms the heart, and even though our protagonist is never able to really fly, with a little help from friends, Penguin does manage to glide.

The show is recommended for children ages 2-7, so if you have any young ones in that age group, take them! You can find out more about the show here: