Something Rotten and Something Fresh

On Wednesday, I was fortunate enough to win the online lottery for $35 seats to see Something Rotten! on Broadway. As a fan of both Shakespeare and musical theater, I had a blast. 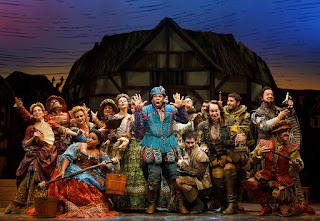 From the moment a minstrel wandered on stage to sing the opening number "Welcome to the Renaissance" I was hooked. As the Elizabethan actor Nick Bottom, Brian d'Arcy James has a wonderful song called "God I Hate Shakespeare" in which he rolls out all the criticisms current-day audiences have of the Bard. Meanwhile, the other players respond with an incredulous "How can you say that!?!"

If you watched the Tony Awards on Sunday, you saw the cast perform the show-stopping number "A Musical." Well, it literally did stop the show. The audience gave them a standing ovation after that song, and it was only half way through the first act!

Christian Borle, who plays William Shakespeare as a rock-star-like celebrity, clearly earned his Tony for featured actor in a musical. If you see the show, look at the backdrop for the scene where Shakespeare gives a reading in the park. You'll see a Tudor building that looks suspiciously like Belvedere Castle, a clear reference to the Delacorte Theatre in Central Park.

Though the second act gets a little silly, with about every egg joke you could possibly imagine (yes, egg jokes), I still thoroughly enjoyed it. After seeing a lampooning of Shakespeare, however, it was only fitting that I go see an actual Shakespeare play. The next evening, I did just that, taking in New York Classical Theatre's production of The Taming of the Shrew.

I usually enjoy NYCT's productions, but I had a special reason for seeing this one, as it starred my old classmate from Drew University, Amy Hutchins, as Kate. Amy is a superb Shakespearean actor (as well as a talented singer) and it is always a pleasure to watch her perform.

Even setting aside its charismatic star, however, the production was remarkably fresh and interesting. The Taming of the Shrew is done quite frequently, so I've seen a number of productions, but this one continued to surprise me.

NYCT decided to keep the Christopher Sly framing device, which is often dropped from productions. Another version of the play, an anonymous piece titled A Pleasant Conceited Historie, called the taming of a Shrew, flushes out the Christopher Sly framing device. Scholars are divided over the origin of that text, but Alexander Pope included the extra Sly scenes when he edited Shakespeare's play.

While this production seems to have used some lines from the alternate version (and apparently some lines from David Garrick's adaptation Catherine and Petruchio) it came up with its own ending for the Sly subplot, which, whether you agree with it or not, is worth seeing.

New York Classical Theatre is performing the play in Central Park until June 28. There will also be special performances in Prospect Park from June 23 through July 1, and in Teardrop Park from July 8 through July 12. For more information, visit NYCT's website here: