This summer, I had the pleasure of seeing two Sternheim plays in one with David Mouchtar-Samorai's mash-up of Die Hose and Burger Schippel at the Ruhrfestspiele in Recklinghausen. Both plays satirize the pretensions of the would-be bourgeois, so they very much fit together. 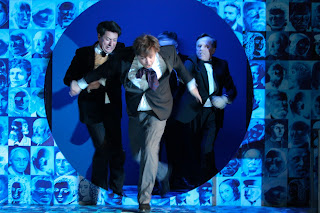 Carl Sternheim had a habit of recycling his characters. In fact, Die Hose began a cycle of plays by Sternheim on what he called "The Heroic Life of the Bourgeois." He followed up Die Hose with his 1914 play Der Snob. This play continues the story of Theobald and Louise Maske, as well as letting the audience in on the life of their son, whose birth is alluded to in the previous play.

The first act of Der Snob opens with the ironically named son, Christian Snob, breaking off a relationship with Sybil, a lover who helped him rise in society but whom he has now outgrown. He offers Sybil cash to pay for her services, with interest, so he can be completely independent and owe nothing to anything. Next, he tries to make the same arrangement with his parents, paying them for everything they spent raising him. It's as if he wants to be a truly self-made man.

Christian aims to marry Marianne, the daughter of a count. In the second act, he makes progress toward this goal and becomes engaged to Marianne, in spite of the count's reservations. The presence of his father, however, becomes a source of continual worry. Christian seems to vacillate between being embarrassed by his father and wanting to use Theobald to rub the count's nose in the fact that his daughter is marrying such an upstart.

In the third act, the story of Louise's courters in Die Hose comes back, and Christian begins to wonder whether or not he might be the bastard son of a Viscount. This becomes a source of both shame and titillation. In the final scene, Marianne discovers the secret on her wedding night. She enthusiastically greets a portrait of Louise as "sweet mother adultress" and Christian as her "dear husband and lord."

With such complicated psychosexual messes in his plays, it's as if Sternheim is the spiritual son of Frank Wedekind. In fact, Sternheim married Pamela Wedekind in 1930, becoming the great playwright's son-in-law. Wedekind was dead by that time, but still, you can't make this stuff up!

Read my next post for my thoughts of Wedekind.