I generally don't follow the New York Innovative Theatre Awards, off-off-Broadway's way-smaller version of the Tonys, but this year they've nominated a number of great shows, so I wanted to blog about it.

Not to mention Outstanding Production of a New Play, which it definitely deserves to win!

As lovely as Travis's costumes were for The Thirteenth Commandment, they still don't compare to the costumes in Geek!, the Vampire Cowboys production of Crystal Skillman's play about two teenage girls who brave an anime con in order to meet their hero. If Kristina Makowski and Jessica Wegener Shay don't win for those costumes, I will be surprised.

And while we're on the subject of design, Lynda White received a very much deserved nomination for her mask design and construction for the Faux-Real Theatre Company's production of Oedipus XX/XY. (Sample below!)

Congratulations to all the nominees! 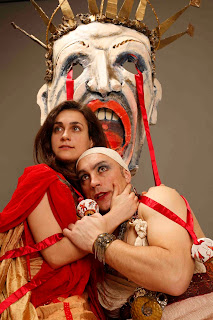 Posted by James Armstrong, Playwright at 9:26 AM