Around the World in 80 Days

Last night, I saw the wonderful steampunk version of Around the World in 80 Days currently running off-Broadway at The New Theater at 45th Street. First of all... wow.

This is the quick-change adaptation penned by Mark Brown, in which five actors portray approximately three zillion characters. I saw it when Irish Rep did the play five or six years ago. I enjoyed that production, but was surprised that it was being revived so soon afterward. I wasn't sure I wanted to see a play (even a good one) that I had just seen a few years ago. On the other hand... steampunk.

The costumes are wonderful, and the set magnificent. Plus, the production deftly uses projections, showing clocks, maps, and various stylized images to help tell the story. Ten years ago, you had to go to Broadway to see projections of this level of quality, or at least a major off-Broadway house. It's wonderful that the technology has come down to more intimate venues as well.

And what is that venue? Well, The New Theater at 45th Street is the latest name for the building across from my old apartment on 45th Street near 9th Avenue. It's where I saw my first play reading in New York (a piece by N. Richard Nash). It's also where there was a staged reading of my play The Metric System and workshop productions of Maggie the Pirate, a musical I wrote with Joshua H. Cohen, and The True Author... Revealed, a one-woman show I wrote starring Katherine Harte-DeCoux.

Of course, when I worked in that building, it was a dump. Producer Cedric Yau should get a medal from the block association for transforming it into one of the classier places you can go now to see intimate theater. Not only is the lobby cleaned up and inviting, but the theater itself is decorated with a steampunk mural that blends into the set, bringing the audience right into the action. Yau also shelled out money to provide much-needed new seats and carpeting (which actually match the set and mural!) for the venerable old venue.

In order for the piece to work, however, you have to have good actors, and this production delivers. Not only is the cast hysterical, but they keep up the energy throughout the show, conveying a sense of urgency as Fogg and his retinue strive to make each leg of the journey on time and circle the world in the titular 80 days. I found myself cheering for them with increasing intensity throughout the second act, and I was on the edge of my seat, in spite of knowing all of the plot twists beforehand.

Below is a publicity photo I grabbed from the show's website. If you get a chance, check it out! 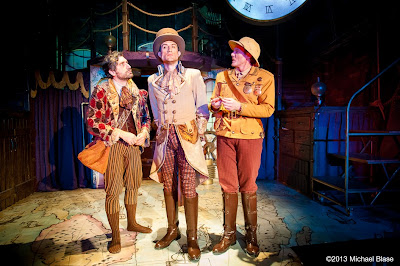 Posted by James Armstrong, Playwright at 7:00 AM