Today, I had to go to Midtown for a chiropractor's appointment, and since I was in the neighborhood, I wanted to swing by Amy's Bread. That meant walking through Times Square and the theater district. 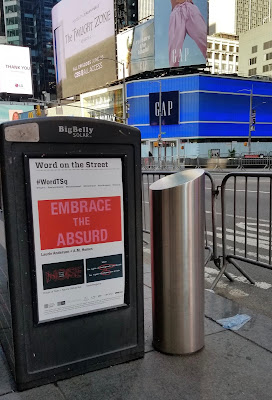 There, in the middle of a mostly empty Times Square, across the street from a shuttered Gap and underneath an advertisement for The Twilight Zone, was a trashcan that had on its side the message: "Embrace the Absurd."

Well, I guess that's typical 2020. In New York City, our mayor has defended police officers who disgraced their badge and uniform by driving head-on into protestors. Not to be outdone, the current occupant of 1600 Pennsylvania Avenue had his Attorney General violently clear a public park in order to hold a photo op in front of a church.

Are we living in the Twilight Zone? (Sadly, George Floyd, Breonna Taylor, and Ahmaud Arbery are no longer living in it....) Theater is banned, libraries are closed, and none of us knows how much of a country is going to be left when we get up in the morning. Is this the absurd we're asked to embrace? Well, the world is starting to look like a Samuel Beckett landscape. Endgame, perhaps...?

Somehow, police brutality, military action against protestors, and grand presidential blasphemy have made us forget about the deaths of more than 100,000 Americans due to a completely foreseeable viral outbreak. You know, you would think the deaths of 100,000 people would be hard to forget, but this is 2020. Broadway hasn't forgotten them, which is why it will remain closed until at least after Labor Day, and possibly not until next year. The Metropolitan Opera has officially said they won't reopen until the new year.

Optimists point out that an outbreak of the plague might have prodded William Shakespeare to write King Lear, but temporary theater closures have a way of becoming more or less permanent. Outbreaks of plague in Stuart England preceded a political crisis that led to the theaters being shuttered for a generation, with drama banned from 1642 to 1660. Can we really trust our political leaders, who mismanaged a pandemic, ordered the military to mobilize against our own people, and are now seemingly claiming divine right? What else might they try to pull?

Well, if you're looking for a sign of better things to come, head down to the Broadhurst Theatre on 44th Street. That's where I saw the life-affirming proclamation "ONLY INTERMISSION" above the once and future home of Jagged Little Pill. 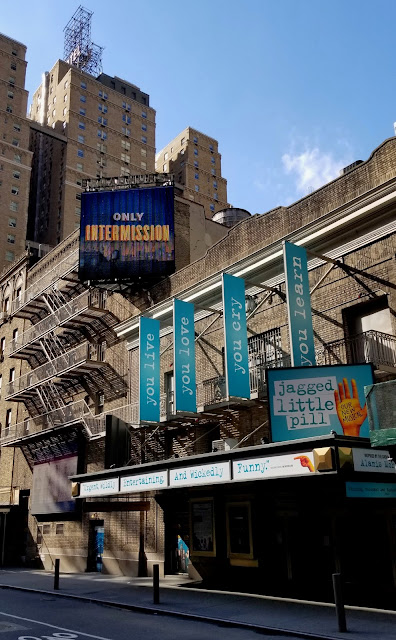 The Alanis Morissette/Diablo Cody musical was not at the top of my list of things to see, but I think if I could watch it now, I would fall head over feet. (I know! Isn't it ironic?)
Posted by James Armstrong, Playwright at 6:58 PM