Last night, I got to see Moulin Rouge on Broadway, thanks to the show's online lottery. It was certainly a night to remember. 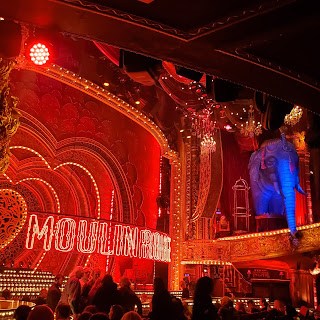 I saw understudy Dylan Paul as Christian, but the show's star Satine--Karen Olivio--was there, and Danny Burstein was playing his regular role as the master of ceremonies, Harold Zidler.

Since I loved the 2001 movie so much, I had my reservations about the stage show, but the script by John Logan does an admirable job of keeping the moments we all loved from the film, but always with a twist from the original.

When you walk into the auditorium, you find that the theatre has truly been transformed. The audience gets the feeling that they really are at the Moulin Rouge, not the actual nightclub that opened in Paris in 1889, inspired posters by Henri Toulouse-Lautrec, and later became a home of successful operettas, but the Moulin Rouge of the movie, the wild fever dream of film director Baz Luhrmann.

Though Alex Timbers directed the stage musical, Luhrmann is credited as a creative consultant. The collaboration appears to have worked well, since the show's aesthetic feels unified. From the moment you enter the theatre, performers are already walking around, smoking, flirting with each other, and generally enthralling the audience. "No photography until intermission," the ushers tell you, which allows everyone to savor the moment. (Unfortunately, it also means that intermission becomes selfie hell, but that probably couldn't be avoided.)

The opening number does a great job of evoking not just the setting but the various types of people who frequented the Moulin Rouge. The most interesting denizen of the club is Toulouse-Lautrec, played wonderfully by Sahr Ngaujah. I had seen him before in various Athol Fugard plays at the Signature Theatre, but missed his Tony-nominated performance in Fela! on Broadway. He's an amazing actor, and he inhabits the the character of Toulouse-Lautrec--again, not necessarily as he was, but how we might dream him to be.

When the film came out, it was a shock to hear pop songs performed in a period piece set a hundred years in the past. The stage musical could only meet the challenge of the original by incorporating some new pop songs, many of which weren't even written when the movie premiered, but have so infected our culture that we cease to even think about what their lyrics are saying. By resetting these songs in a completely alien environment, we hear them in a new way, and the show is able to use them to tell its story, even though they were never intended for that purpose.

Moulin Rouge is a jukebox musical, but it uses its songs so cleverly, we don't feel we need new music. The old songs feel new, whether they're a recent hit by Beyoncé or a classic tune by the Rolling Stones. (Speaking of which, Tam Mutu does a mean Stones cover as the villainous Duke of Monroth, who is far more evil than he ever was in the movie.)

So if like me, you had reservations about seeing the musical on Broadway, put them aside. Missing this show would be an elephantine mistake.
Posted by James Armstrong, Playwright at 5:44 PM