My article "Protagonists in Paper: Toy Theatres and the Cultivation of Celebrity" is out now in Theatre Notebook. 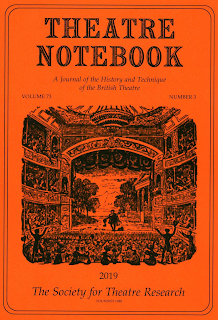 I was able to write the article with help from a research award from the Society for Theatre Research, which publishes Theatre Notebook. They helped subsidize a trip I took to London to examine the toy theatre collection in the British Museum.

The new issue of Theatre Notebook also has Julian Crowe's follow-up article on the actress Mary Ann Canning and an article by Gerald Baker on performance in the late 17th century. The journal always has interesting articles, which have provided fodder for some past blog entries.

I have some other good news to announce as well. PlayMakers Repertory Company has chosen my play Worth as a semifinalist for the International Thomas Wolfe Playwriting Competition. I should find out in February if the play makes it to the finals.

Also in February, New York Theatre Barn will be presenting selections from my new musical Burned, with songs by Joshua H. Cohen. More information on that will come next month, but in the meantime, mark your calendars for February 3rd.

Hopefully, I'll be able to make some other exciting announcements here soon!
Posted by James Armstrong, Playwright at 10:08 AM