This year marks the bicentennial of the birth of author Herman Melville. Though he was actually born in August, November was the beginning of the narrator's journey in Moby-Dick, so it is this weekend that the Rosenbach Library and the Independence Seaport Museum in Philadelphia will be sponsoring a marathon reading of the novel. And I'll be there. 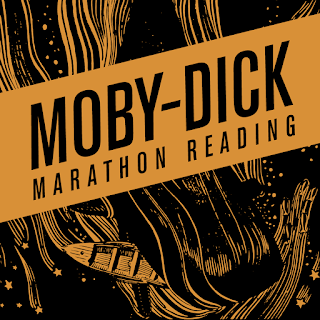 Whenever I find myself growing grim about the mouth; whenever it is a damp, drizzly November in my soul; whenever I find myself involuntarily pausing before coffin warehouses, and bringing up the rear of every funeral I meet; and especially whenever my hypos get such an upper hand of me, that it requires a strong moral principle to prevent me from deliberately stepping into the street, and methodically knocking people's hats off--then, I account it high time to get to sea as soon as I can.

Thus begins the unnamed narrator who asks us to call him Ishmael. I won't be reading those lines, but I am slated to read Chapter 10, "A Bosom Friend," about Ishmael and his shipmate Queequeg.

I wrote my own stage adaptation of Moby-Dick which premiered at Wellfleet Harbor Actors Theater on Cape Cod. This weekend, though, it will be a treat to experience the full text of the novel as part of a 25-hour marathon.

The reading will commence at 2:00 pm on Saturday, November 9th inside the Independence Seaport Museum. We'll be on the deck of the Schooner Diligence, which is a full-scale replica of a historic ship and is located inside the main exhibition hall. Organizers estimate the reading will end at approximately 3:15 pm on Sunday, November 10th.

I'll actually be sneaking out for part of the marathon on Sunday to catch my friend Herb Moskovitz give a talk at the Philadelphia Branch of the Wodehouse Society about the stage and screen adaptations of A Damsel in Distress, a novel that is admittedly lighter fare than Moby-Dick, but did inspire a musical with songs by George and Ira Gershwin.

Anyway, the Moby-Dick marathon is free and open to the public, so stop by the Independence Seaport Museum sometime this weekend if you happen to be in Philadelphia. It should be a voyage to remember.
Posted by James Armstrong, Playwright at 9:02 AM