For the record, I am personally opposed to serial killers. Granted, I haven't met very many (or any, so far as I know). Still, I consider myself staunchly in the anti-serial-killer column.

Yet when you put a mass murderer onstage, whether it's Richard III or Sweeney Todd, I'm fascinated. The skill with which the killer goes from one victim to the next, dispatching anyone in his path, creates an intrigue. I can't look away.

Therein lies the beauty of Sam Kahn's play Ultraviolence. As we watch one sympathetic character after another dispatched by a self-proclaimed narcissist, we find ourselves rooting not for the good, wholesome, ordinary people, but for the killer narcissist.

That narcissist is James, played by Michael Tyler, who also appeared in Kahn's previous play Chatter which premiered last year at The Tank. Tyler had a minor role in Chatter, but in Ultraviolence he's the focus of attention, even when (perhaps especially when) he has his back to the audience.

James makes his presence known, even before he appears to the other characters, by.... Well... by having loud sex with an upstairs neighbor, Karen (played by Whitney Harris). Eventually, Karen introduces the new man in her life to the folks who are downstairs: the cerebral Laura (Annie Hägg), her brother Ed (Michael Coppola) and her depressed roommate Page (Deya Danielle).

Page is fascinating to James--as she seems to be to everyone else in the play, too. "It's not just that she's beautiful," Laura tells us, since "in New York, there are a lot of very beautiful girls." Rather, Page has some extra quality that makes her immediately desired. Laura puts it down to "sad eyes," but it seems to be more than that. She is the flower that has not yet bloomed. Trapped in a cycle of depression, she seems like someone who could be amazing, if she could only find the key to unlock her potential.

That key is--yup--ultraviolence. As she begins a relationship with James, she starts to glow, and simultaneously her friends start to disappear, having a tendency to break their necks whenever James is around. Fortunately, nothing the audience watches is actually violent. Director Roxana Kadyrova (also a talented actor who played the lead in Chatter last year) stages the play so that red clothing and dance-like movements replace actual acts of violence onstage.

Derek Stratton shows up late in the show as the wholesome Andrew, who might be Page's last chance of escaping James's murderous vortex that sucks her into his dark world. Stratton is also credited as choreographer, and some of the dance sections are both beautiful to watch and surprisingly acrobatic.

Like Chatter, Ultraviolence makes use of projections, which fit in well with the scenic design by Kellyann Hee. The play is being performed at Eris Evolution in Brooklyn, which boasts an intimate performance space and some of the hardest working bartenders in New York.

The show is only playing until March 16, so get your tickets now! 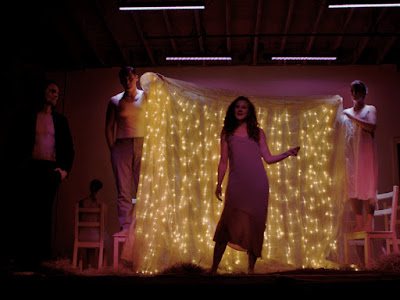