If you're a Moliere fan, make sure you don't miss Imagining the Imaginary Invalid which closes at La Mama on Sunday. 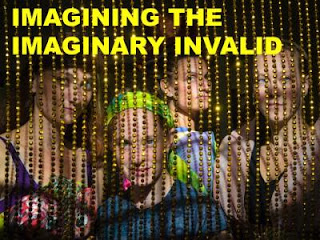 I saw the show last night, shortly after reading Henri van Laun's translation of the original play (Moliere's Imaginary Invalid). A knowledge of the text is not necessary to see the show, but it does help.

For instance, when Marylouise Burke, who plays Argan (as well as Moliere, and an actress who approximates Burke herself), cuts down all of the bills to various doctors, the business is much funnier when you know that Moliere actually wrote some of the crazy things she says.

As you might imagine, much of the fun of the piece comes from the various levels of theatricality, since we are watching a modern company of actors (something resembling the Mabou Mines company in the 1970s), pretend to be Moliere's company (in the 1670s), pretend to be the characters in the play. At the same time, we are of course actually watching 21st century performers.

In other words, if you don't like meta, stay at home. However, the production deftly weaves together the various strands of reality. Moliere collapsed onstage while performing the role of Argan and died shortly later. This present re-imagining was originally developed for the actress Ruth Maleczech, who died during the development process. As the audience's guide, Burke lets us in on all this information, also introducing us to the director, Clove Galilee, Maleczech's daughter, who also appears in the production, both as herself and as Moliere's lover, and as... well you get the idea.

Mabou Mines developed the show in collaboration with Galilee's company, Trick Saddle. The piece also has some great dance numbers (also choreographed by Galilee). If you're interested in seeing it, go to: