This past summer, I saw Figurentheater Wilde und Vogel's intimate chamber musical Songs for Alice at the Ruhrfestspiele Fringe Festival in Recklinghausen, Germany. Based on the works of Lewis Carroll, the play bypasses a linear narrative structure, instead using songs to structure the piece. I was telling people about it today, and a friend of mine going to Germany in January said he wants to see it if he gets a chance. 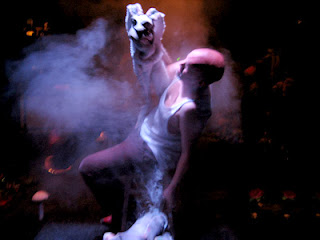 Well, Figurentheater Wilde und Vogel has not yet posted their schedule for January, but they have kept the show in their rotation, last performing it in Leipzig in October.

Charlotte Wilde and Michael Vogel have worked together since 1997. For this piece they used a freelance director, Hendrick Mannes, and added an extra musician, bass player Johannes Frisch. The play contains scenes and poems from Carroll's Alice's Adventures in Wonderland and Through the Looking-Glass, but it discards the narratives of both of those books. Instead, it presents incidents and songs in a seemingly random order.

Most stage and screen adaptations of the Alice books try to string events together into a logical sequence. Songs for Alice is notable for moving in precisely the opposite direction, presenting the different parts of the books as separate and distinct.

The play's use of puppets might once have set it apart from the world of musical theatre, but in the wake of such blockbusters as The Lion King and Avenue Q, puppets no longer seem so remote to musical-going audiences. Just as The Lion King sometimes merges together performer and puppet, Vogel frequently uses a similar technique in which he transforms himself into part of a puppet. 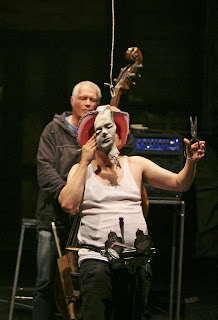 Avenue Q brought to Broadway the technique of having puppeteers dressed in neutral costumes standing in plain view of the audience. Vogel makes use of this technique as well, though he often suits his own appearance to the action of the scene. During the tea party sequence, for instance, he dons a top hat to become the Mad Hatter while also manipulating puppets of the Dormouse and the March Hare. 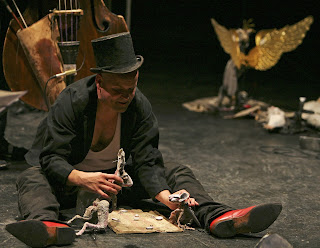 Other puppets include a Dodo bird, a Flamingo croquet mallet, a Caterpillar that blows real smoke and a White Rabbit puppet that is both comic and vaguely threatening at the same time. This aesthetic, both comedic and frightening, carries through the entire piece. Such an approach can perhaps be seen on Broadway, such as in Wicked's use of both playful musical comedy and foreboding signs of totalitarianism. The scale of Songs for Alice, however, is exactly the opposite of that for Wicked. While the Gershwin Theatre can fit 1,900 people, a technical leaflet on Figurentheater Wilde und Vogel's website claims Songs for Alice works best in a theatre that measures 12 by 10 meters and that the audience can be no more than 200. 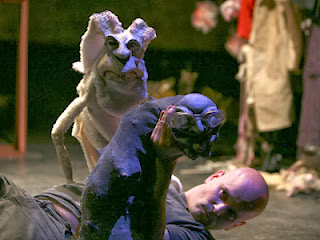 If you're interested in finding out more about this exciting production, check out Figurentheater Wilde und Vogel's website here: