The following full-length plays have had productions and/or professional readings:

Betty Thorpe tells the true story of the American spy whose sexual exploits led to the breaking of the Nazi military code ENIGMA. In the play, this headstrong, snotty diplomat's wife is recruited by the British secret service to seduce a dashing Polish count and learn his secrets. The plan works brilliantly, until she starts to fall in love with the man she is betraying.

With the invasions of Austria and Czechoslovakia, Poland's time seems to be running out. Betty must bring Britain the substantial work done by Poland on the ENIGMA code before it is lost to the Nazis forever. A crucial misstep jeopardizes everything, and Betty is allowed only one more week in Poland. It's her last chance at gaining the papers, but it may also be her last chance for emotional redemption.

Betty Thorpe can be performed with a minimal set and a cast of five performing multiple roles. The play explores issues of love, deception, and the true meaning of patriotism. It is written in a fun, theatrical style that gradually darkens as its world descends into the chaos of the Second World War.

The play has received readings at the Ashland New Plays Festival, CAP 21, and The Little Theatre at Felician College. Most recently, it had a reading at Bristol Riverside Theatre in Pennsylvania as part of their "America Rising" series.

Blood, Lust, and Poetry explores the fascinating theatre world of London, 1599. It begins backstage at the opening of the Globe Theatre, where the Lord Chamberlain's men are just finishing up a stunning revival of their old war-horse of a play, Richard III. Here we meet the immortal Richard Burbage, along with John Heminges, Henry Condell, Thomas Pope, Augustine Phillips, and other actors, all famed in their day. Into this world burst two Elizabethan gentlemen, both theatre fanatics, on a quest to meet the man they consider to be the greatest playwright of their day, probably the greatest ever: Ben Jonson. 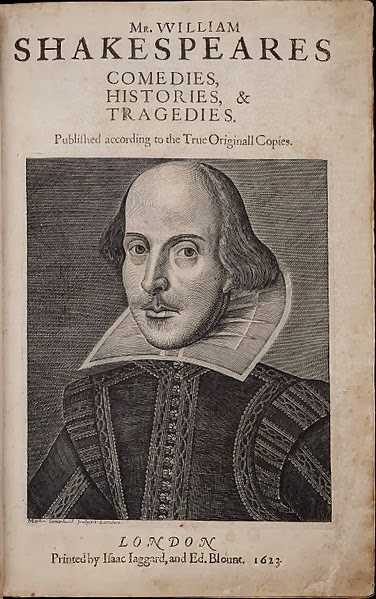 As our two heros practically stumble over a poet named William Shakespeare, we follow them to the Mermaid Tavern. There, re-united with Burbage, an impromptu performance by the great actor forces them to reconsider their dogmatic zeal for Jonson. One of them persists in his hero-worship, while the other is opened up to the world of Shakespeare, and the raw power of "death, sex, and iambic pentameter."

The play reaches its peak of insanity in the second act, with a fateful meeting in the upper room of the Boar's Head Tavern. There, all the characters met along the way come together. Not just poetry, but friendships and lives, are tested. Some are found worthy, and others wanting....

Blood, Lust, and Poetry has had readings at the John Harms Theater and by the Genesius Guild.
2 women
11 men

Bones of the Sea

Bones of the Sea tells the true story of Mary Anning, a working-class woman in Dorset, England, who helped to revolutionize the field of paleontology. 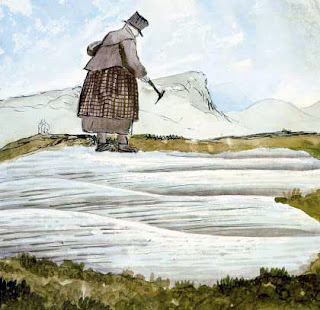 The play begins in an inn located in Anning's hometown of Lyme-Regis. Esteemed scientist Henry De la Beche is arguing with his colleague over whether or not Anning should meet with a naturalist, who might be trying to discredit her.

But that is not the only problem. Anning hasn't been acting like herself lately, and De la Beche is carried back in his memory to a time when the two were a pair of young misfits, roaming the beach together, searching for finds along the fossil-rich cliffs.

This full-length play swiftly travels in and out of flashbacks, flowing back and forth across time, as the self-taught Anning and the wealthy De la Beche forge an unlikely friendship that lasts through fame and glory, disappointment and heartbreak.

Elephant Room Productions recently did a reading of the play. You can hear a selection from the play and an interview with James on the company's podcast The Trumpet. The play also had a reading at Pasadena Playhouse as a part of the Mach 33 Festival of science-driven plays. 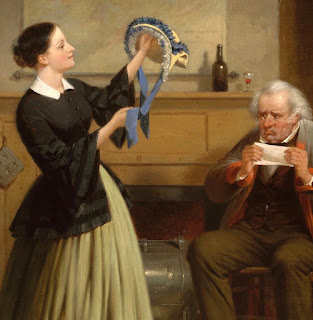 Karl Marx, working as a lowly journalist in London, mistakenly gets hold of a scandalous letter by Charles Dickens. He determines it must be returned to its rightful owner, but his teenage daughter Jenny (a materialist, though not of the philosophical kind) has other plans. She intends to have the scandalous news published, thus earning her father a sizable bonus and allowing her to get that new bonnet she's been wanting!

Only Nelly Ternan, the actress lady friend of Mr. Dickens, inadvertently takes the letter herself. Will the letter be recovered? Will Miss Ternan's secret affair with the novelist be revealed? Will Herr Marx ever complete his magnum opus on political economy?

Capital deals with two of the most iconic figures of the Victorian era, imagining how their paths might have crossed, and how decisions made more than 150 years ago might still be affecting us today.

The play premiered in 2017 at Detroit Repertory Theatre.

The Cold, Cold Boot tells the story of a young Chinese woman captured and enslaved by a sadistic Japanese military commander during the Second World War. After years of hell, an American soldier finally liberates her--and she promptly shoots the man who is setting her free.

As a military defense attorney tries to piece together why she could have done such a thing, she remembers her years in captivity. In vivid flashbacks, we witness a frightening dance of love and hate that ultimately challenges the way in which we perceive reality.

The Cold, Cold Boot can be performed with a minimal set and a cast of four.

The play had a staged reading by Urban Stages in New York City.

Dark Night of the Soul

It is the spring of 1431. A young French peasant girl is locked in a tower in the castle of Rouen. Her name is Joan. Her crime is claiming to hear the voice of God. 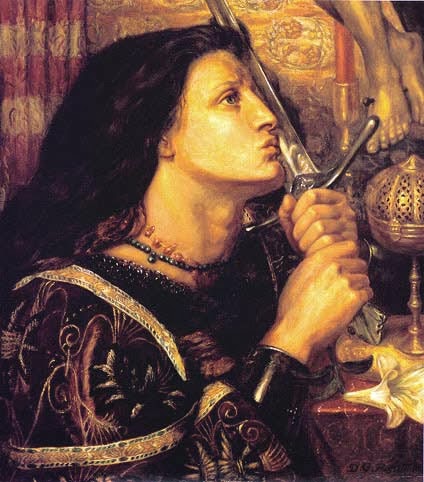 But the voice is gone now, and Joan is alone. Her king, her people, and her God have all abandoned her. A powerful English noble, Richard, Earl of Warwick, is intent on having her tried, found guilty, and burned at the stake. The bishop presiding over her trial is more concerned with formality than justice. Her only ally seems to be Brother Martin, a young Dominican who desperately wants to save her from the flames.

Joan is all too aware, however, that there are some fates worse than death. As she struggles to find the strength she once had, Richard, Martin, and even the bishop surprisingly shift alliances in response to Joan's quest to find the voice within her.

Dark Night of the Soul was produced as a radio drama by Radio Theatre Project Live. Click to listen to Part 1 and Part 2. It more recently had a staged reading by Nittany Theatre at the Barn after winning the 2017 National Free Speech Play Contest. 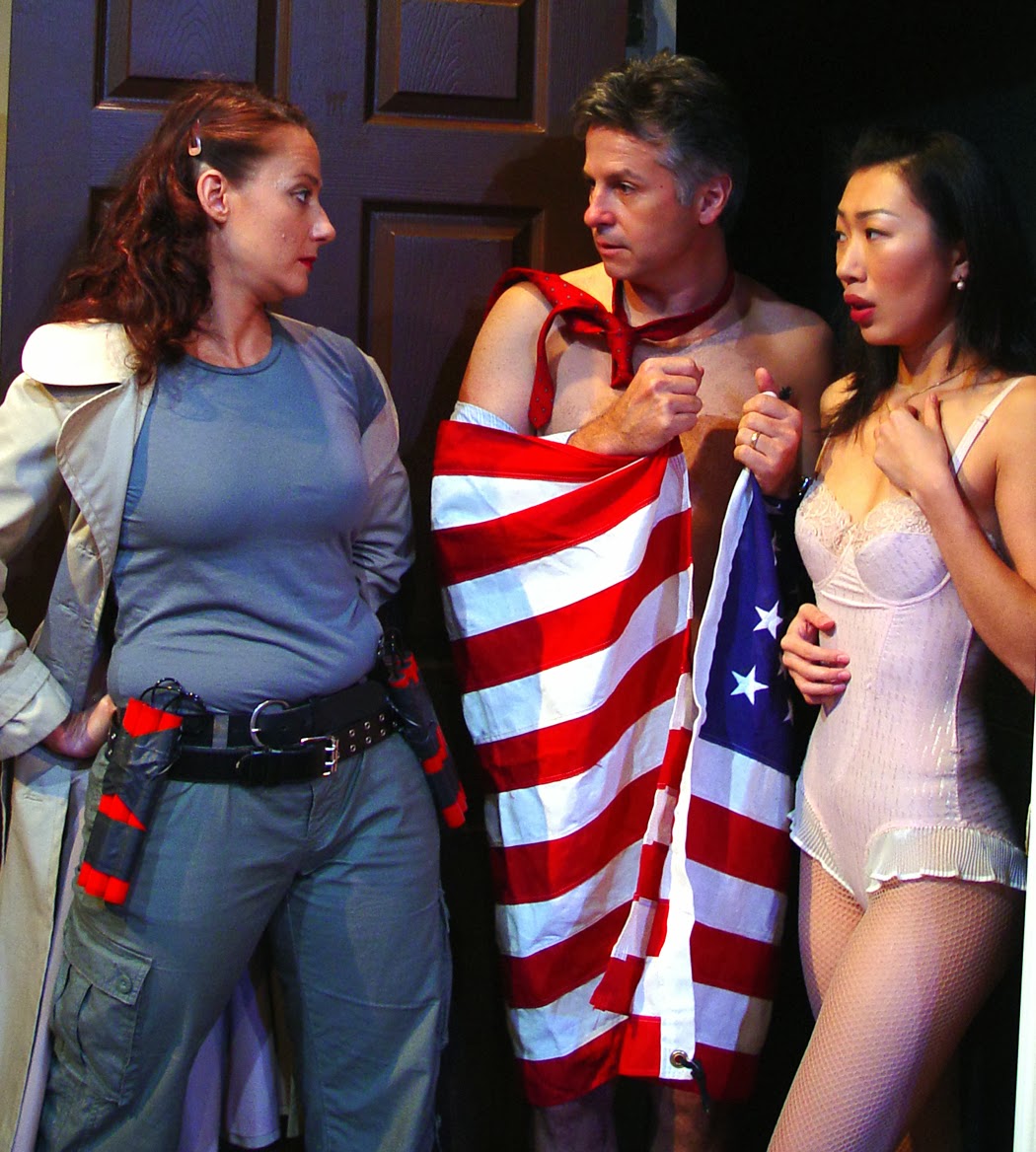 Some women will do anything for a green card. Dick Ross, a mid-level bureaucrat at the State Department, knows that all too well. Frustrated by his thankless job and a marriage on the rocks, he tells a beautiful young woman he is the Assistant Secretary of State and can get her a green card. Then he tells another. Then another.

When the three women show up at his office on the same night to cash in on his promise, Dick has more than his hands full... and then a fourth woman arrives, with an entirely different plan in store for him.

Foggy Bottom takes the classic sex farce and gives it a new political spin. Immigration, human rights, and the War on Terror have never been funnier, but the audience is forced to think while they laugh, as the situation at the State Department becomes ever more dire.

The play was originally produced by the Abingdon Theatre Company in New York City.

The night before Cousin Eleanor's wedding, the Huxley clan reunites at their family estate on the outskirts of Boston. William, the youngest, has been living with his older brother Thomas since the death of their father. Thomas's wife, Ingrid, wants William out of the house, and is not terribly pleased with her other in-laws who are staying for the wedding: Lucy, an eccentric anthropologist, and Jasper, a lecherous literature professor. 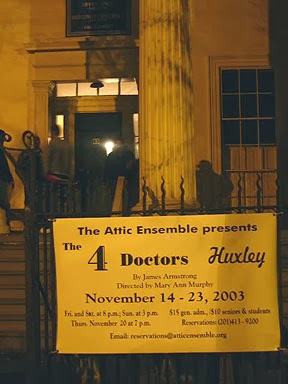 As the only college dropout in a house filled with hyper-cerebral academics, William feels pressured to prove himself, whether it's with the hopelessly melodramatic novel he's writing, or with Jenny, the buxom but socially inept girl he's dating.

The culture clash between the sometimes snobbish Huxleys and the all-too-working-class Jenny comes to a head as William announces his plan to propose to her. But when Jenny inevitably rejects him, he turns his passion against his siblings, rooting up the dark family secrets and forcing everyone to look at themselves for the first time as who they really are.

The Four Doctors Huxley was originally produced by the Attic Ensemble in Jersey City, New Jersey. 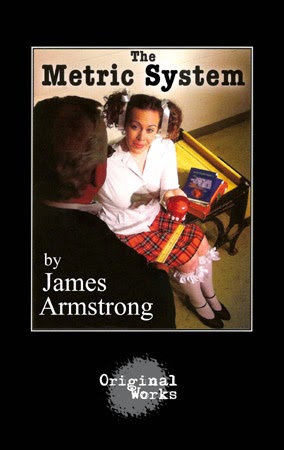 When she was twelve years old, Mary Beth Riley was abused by a priest at the Catholic school she attended. Now, as an adult struggling to get her life together, she strikes up an unlikely relationship with Alan Stevens, a former teacher who lost his job after being accused of beating a female student. Drawn to a darkness she senses inside of him, Mary Beth finds herself simultaneously growing closer to him and desperately trying to pull away.

Matters are complicated when Alan's wife Susie finds out about the two meeting and suspects a sexual affair. In truth, however, the bond between Mary Beth and Alan is much stronger than mere sex, and possibly much more dangerous.

The Metric System proceeds with uncompromising logic as these three people search for their own happiness and for the ability to reach out to one another. This dark comedy examines pain, power, and longing as human beings try to work out a new system by which they can live. As Susie wonders, "Maybe you just have to keep stumbling, figuring it out differently each day."

Playwrights' Forum premiered The Metric System at TheatreWorks in Memphis, Tennessee. The script is now published by Original Works Publishing.

Italian-American inventor Antonio Meucci did pioneering work with electricity in the mid-nineteenth century, and he reportedly sent sound messages over electrical wires long before Alexander Graham Bell's famous cry for help to his assistant. 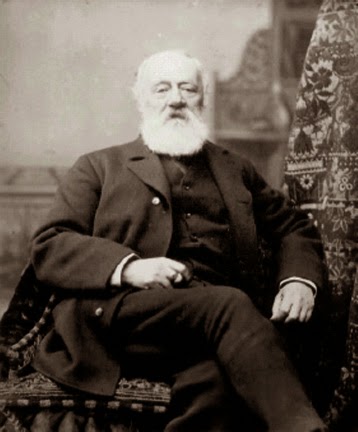 In spite of his many contributions to the advancement of technology, Meucci died in obscurity, embroiled in one of the most infamous patent disputes in our nation's history.

Meucci's Message brings the great inventor back to life, leading the audience on a journey from the streets of Florence, to an opera house in Havana, to the sidewalks of New York, to a house on Staten Island where he made history. It tells Meucci's story of constant struggle, from opposing tyranny in Italy to standing up to an army of corporate lawyers in a protracted legal battle over who really had the right to say he created something.

Sundog Theatre commissioned Meucci's Message as a radio-play-style drama. It was originally performed at Casa Belvedere on Staten Island.

Artie Sternheim, a successful money manager, convinces a prospective investor named Marc he can make him rich. Little does he know, Marc is actually a government agent investigating Artie's fund, and he and his partner Daphne clearly intend to bring down the firm. 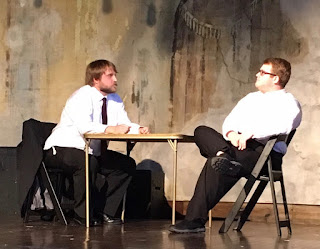 But as the tables are turned, we start to wonder: Who was really lying? And who is really trustworthy? Who is actually a man of worth?

Worth explores our tendency to delude ourselves in personal and romantic relationships as well as in financial ones.

Khaos Company Theatre performed an excerpt from Worth as a part of the Dionysia New Play Festival in 2018.